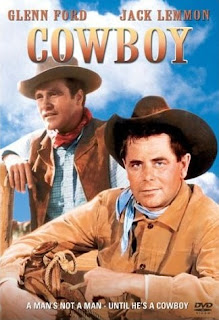 This is a curious mix of a western. Based on a fictitious cowboy memoir, it’s got a good script with an uncredited, blacklisted screenwriter, Dalton Trumbo. One lead role was played by a cowboy movie veteran, Glenn Ford. The other by Jack Lemmon, an otherwise gifted comic actor who in this film was, alas, a round peg in a square hole.

Cowboy is a trail-drive western that starts out a romantic comedy and then veers off into anti-romantic realism. Glenn Ford is a larger-than-life trail boss who’s just arrived in Chicago with a herd of cattle and a crew of noisy trailhands.
Lemmon plays supposedly real-life Frank Harris, who persuades Ford to take him on as one of the outfit. I say “supposedly,” as there’s little evidence that Harris ever did such a thing. In an age of Oprah-endorsed phony memoirs, this should have a ring of familiarity.

The irony is that what Harris invented (or stole) was pretty close to accurate, and the film defies many Hollywood conventions by attempting to honor that accuracy. The trailhands are not just tough but callously indifferent to each other’s welfare.
When one of them gets into trouble in a Mexican cantina, no one is willing to go help him. Determined to go to the rescue alone, Harris is stopped by the trail boss who gets rough and slings a crow bar at him. Better to lose one man than two, he argues. He’s got a herd of cattle to worry about.
Meanwhile, death on the trail is arbitrary – one man dies after some foolishness with a rattlesnake. A former lawman tells of turning in his badge after killing two drunk boys who had playfully jumped him in a dark alley. He later becomes despondent, kills a cousin after a couple drinks in a bar and then hangs himself.
Indians are observed in passing, on the move like refugees. One cowboy tells another not to worry about a calf struggling to keep up with the herd. “Leave it for the coyotes,” he says.

The garishly colored hotel room scenes at the opening of the film give way to the muted reds and browns of the prairie and desert settings. There is dust and bright sunlight. The cattle are not longhorns, but they have long horns. The cowboys may wear modern potato-chip brim hats, but they are otherwise dressed for the part with heavy leather chaps.
There’s an interesting ambiguity in the casting. Glenn Ford’s trail boss starts out a comic stereotype of the loud, big-spending Texas cattleman, who shoots cockroaches on the wall while he sits in a hot bath drinking whiskey. Back on the trail, he grows several shades darker, and the high comedy of the opening scenes is forgotten.
Brian Donlevy and Richard Jaeckel, who have played villains in other westerns, join the trail crew. TV-actor and nice-guy, Dick York (later of “Bewitched”),  plays a trash-talking womanizer. Yet all three turn out to be no better and no worse than the rest of the cowboys.
Harris himself is supposed to become hardened by his experiences on the trail, even more hard-bitten than Ford’s trail boss. In the hands of another actor this might have worked, but if Lemmon ever had a mean streak in him, I can’t remember ever seeing it. And it doesn’t show here. 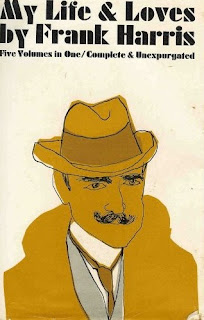 Frank Harris himself. As for history, Harris (1856-1931) was Welsh-born in Ireland and ran away from home at the age of 14. He sailed to America and fetched up in Kansas. There during an 18-month window (1870-72), he says he went on the trail as a cowboy. Given his age and lack of experience, he would have been no more than a cook’s helper, not a business partner of the boss as he is portrayed in the film.
During his lifetime, travels took Harris back and forth between America and Europe, where he befriended the likes of Oscar Wilde, Bernard Shaw, and the young Winston Churchill, among many others. He wrote for and edited numerous publications.
He’s remembered today chiefly for his celebrated sexual adventures. These are recounted in shocking (for the time) detail in his four-volume autobiography, My Life and Loves, published in the 1920s. His On the Trail: Being My Reminiscences as a Cowboy (1930) appeared in an earlier version in volume 1 of the autobiography. Before that it appeared serialized in Vanity Fair in 1908.
He also wrote truly fictional fiction, some of it set in the West. I am curious to see what I can find.

Further reading:
Website devoted to Frank Harris
About My Reminiscences as a Cowboy
Short story by Frank Harris, “The Sheriff and His Partner” (1891)
Picture credits:
Coming up:
Posted by Ron Scheer at 4:41 AM