Here’s another Henry Hathaway film with Susan Hayward. Like Garden of Evil (1954) it was also filmed entirely on location, this time in the Alabama Hills near Lone Pine, California. 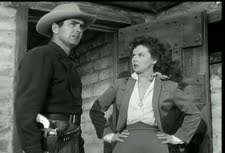 This was one of Susan Hayward’s first big films. Glamorous and tough, she demonstrates again that she can hold her own in a roomful of men without being shrill, hysterical, or totally off-putting. Not given to warmth or smiles, she’s no ice queen either. She’s got time for a male who’s man enough for her, but it’s been a while since one of those came along. That’s the situation in Rawhide anyway.
Aristotle would have approved of the film’s structure. It takes place in 24 hours, and there’s a single setting, a remote relay station on the mail run between San Francisco and St. Louis. There’s an eastbound stage in the morning and a westbound stage at night. Young and handsome Tyrone Power and his grizzled boss (Edgar Buchanan) man the station, providing a cooked meal for passengers and crew, and a team of six fresh mules for the coach.
Hayward, in a hurry to get to St. Louis, is told she has to get off the stage because there is a band of escaped prisoners on the loose. They’ve already robbed one coach and killed the driver. Company rules require her to stay behind because she’s traveling with a small child. Before long, the escaped prisoners show up, and the three adults and child are taken hostage. The rest of the film is about how they get themselves out of this situation alive.
Hathaway was a first-class director. In the last days before widescreen enlarged the scale of the western, this black and white, standard ratio film is stirringly photographed. The entire set was built on location, so action moves smoothly from exteriors to interiors without the often obvious shift back to the studio. 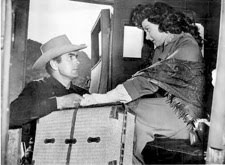 There’s also a gritty realism in the costuming and casting of the secondary characters. While the gang leader (Hugh Marlowe) looks and acts perfectly plausible when he passes himself off as a clean-cut local sheriff, the rest of the bunch have all the appeal of stock tank slime. Gap-toothed, rail-thin Jack Elam is the loose cannon in the gang and easily creeps you out long before he makes the inevitable moves on Hayward.
The film's setting will remind you in some ways of Stagecoach (1939). Hayward’s character as an unmarried woman traveling with a child combines into one the two women in John Ford’s film - the prostitute and the flinty officer’s wife, who gives birth to a baby. For a while, when we first meet Hayward, we take her to be an unwed mother (an anomaly in Production Code era Hollywood). Eventually she explains that the child is not hers but her dead sister’s.
Like Garden of Evil, romance in the film is only a remote possibility. The one big kiss is loaded with irony. The gang leader believes Hayward and Power are married and has them give each other a goodbye kiss at gunpoint. At the end, they are no more than what they were all along, partners in a desperate attempt to survive their ordeal.
History vs. myth. The film brackets its story with a voice-over narration about the overland mail line between San Francisco and St. Louis. The trip takes 25 days and nights, and the fare for passengers is $200, meals included. Using mules instead of horses, we learn, it was called “the Jackass Mail” (a word you wouldn’t expect to get past the Production Code, but there had already been a Wallace Beery Jackass Mail in 1942, with co-star Marjorie Main).
A little research and you’ll find that there was in fact an overland mail line in the years before the Civil War. Pulled by mules, it was known as the Jackass Mail. The fare was $200. Only it took a southern route and ran between San Antonio, Texas, and San Diego, California during 1857-58. Departures were twice monthly.
Travel was a good deal rougher than portrayed in the film. Crossing through Apache and Comanche territory, you were advised to take along firearms and ammo, along with several changes of clothes, coats, and blankets to keep warm. Meals were not exactly included. And there was no coach service between San Diego and Ft. Yuma. You had to cross what is now the Imperial Valley by mule, and the mule seems not to have been included in the fare. 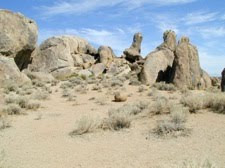 So the historical accuracy is only approximate. But the attempt to give the story a historical context is commendable. While the film takes liberties portraying the relative comfort of transcontinental travel (hardly more than a step down from going by Greyhound), it still looks like adventure for only intrepid souls. So we’ll put the film nearer the middle of the scale – mostly myth but with a persuasive veneer of history.
The DVD is part of a boxed set of restored Fox westerns with The Gunfighter and Garden of Evil. It includes featurettes on Susan Hayward and Lone Pine, California, where Hollywood shot hundreds of movies, mostly westerns, in the rocky, arid terrain (see above) and against the backdrop of the Sierras.
Further reading:
Deconstructing the Jackass Mail Route
The "Real" Jackass Mail

Picture credits:
1) Power and Hayward at doorway, oldtimeentertainment.com
2) Power and Hayward with suitcase, flickr.com
3) Alabama Hills, where a scene from the film was shot, the-great-silence.blogspot.com
Coming up: Review of The Gunfighter and a look at rodeo movies
Posted by Ron Scheer at 6:56 AM