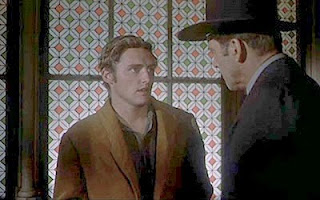 I'm going to miss Dennis Hopper. He had a remarkable screen presence, dating back to Easy Rider (1969), which I think of as a western on motorcycles, and even before that. As a contemporary of James Dean, he appeared in numerous youthful roles, including this one from Gunfight at the OK Corral (1957) in one of several scenes as Billy Clanton with Burt Lancaster as Wyatt Earp. Wyatt attempts to set the young Billy on the strait and narrow, but without success. The boy remains loyal to the clan and dies the day of the shootout.

None of this has any basis in history, but it makes for a theme seen often in Hollywood westerns, a troubled and wayward young man being mentored by an older man of character. It's there already in Owen Wister's The Virginian (1902), where the Virginian tries to persuade a young cowboy to use his easy way with horses to pursue a career as a horse trainer instead of looking for get-rich-quick schemes with shady characters. That ends in tears as well.
Posted by Ron Scheer at 11:32 AM