History and myth collide in this film like the Titanic and the iceberg, only in this case, neither of them survives the collision. Hollywood, with an eye on the box office, likes to create myths of its own and sometimes succeeds. I’m thinking of Butch Cassidy and the Sundance Kid and Bonnie and Clyde. More often than not, we’re better off with the myths that history has given us. 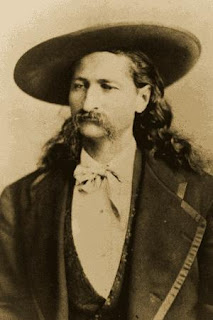 The first 20 minutes of this film are terrific. Jeff Bridges makes a great Wild Bill. The long hair, hat and outfit are accurate, as well as his ivory handled pistols and the way he wears them and fires them. Wild Bill’s reputation as a gunman was well earned, though he killed only a small fraction of the men he was reported to have shot. The movie indulges in this exaggeration, which is fine. History gets to share the screen with myth if it’s a good yarn to be told.
Where it all goes wrong is when Wild Bill arrives in gold-rush crazed Deadwood, South Dakota, in 1876. And from this point on, you can quickly lose count of how history and the myths handed down from history beat anything the screenwriter(s) came up with.
We can start with Calamity Jane, who was in fact the hell-raiser she’s portrayed as in the film. Ellen Barkin is a wonderful actress, but she’s much too pretty for the part. Photos taken in later life show that Calamity Jane lost her looks if she ever had them. This might explain why Hickock apparently didn’t take a strong interest in her, if any. This, of course, didn’t prevent her from regarding him as the love of her life and requesting to be buried beside him when she died many years later.
In the film, she’s also supposed to have had a previous affair with Hickock. The film has her furious that Bill doesn’t offer to resume that relationship. But history tells us that they had only just met when they arrived in Deadwood. Portraying her solely as a case of unrequited love does the historical Calamity Jane a disservice – she was far more than that – and it makes her less than three-dimensional as a character in the film.
Others may disagree with that point, but no one can reasonably justify the film version of Hickock’s shooting by the coward Jack McCall. There are different ways of interpreting the few facts we have about that, but most reveal Jack as a naive young man of questionable character who lost all his money to Hickock in a poker game. The following day he walked up behind Wild Bill as he was playing cards again in the same saloon and shot him in the head.
The film makes Jack out to be Hickock’s son from a former romantic union with a woman more than 20 years before (Diane Lane wasted in this bit part – she’d played the central role of the prostitute Laurie in Lonesome Dove a decade earlier). Given Hickock’s age when he died at 39, he would have been a mere callow youth to have fathered Jack, who was 23 at the time. Not impossible, but still.
McCall is mad at Bill for another reason besides the apparent abandonment of his mother. We’re supposed to believe that Bill killed his step-father in a gun duel some years later – a scene based on an incident with a different man who’d won Bill’s watch in a card game and then taunted him with it in the street the following day. In life, McCall defended himself at his trial by claiming that Wild Bill had killed his brother. True or not, that would have been reason enough in the film. The possibility that it may have been a lie adds an interesting ambiguity – which history is full of.
The portrayal of the killing of Wild Bill forsakes both history and myth. The scene takes place in a deserted saloon, where McCall arrives with two hit men whose help he’s enlisted. One of them is African American, with no apparent purpose except the irony, as Bill points out, that he fought for the Union to free the slaves. They discover Bill at one of the tables, not playing cards but roused to an episode of sexual congress with Calamity Jane herself.
Right.
There follows what is supposed to be a suspenseful sequence in which McCall and the hit men take turns drawing aim at Hickock, hoping maybe to see him beg for his life. Losing patience, Bill finally offers to kill himself.
This nonsense resolves into something remotely resembling the final poker game. With an over-the-shoulder shot of Bill’s hand, you expect aces and eights to turn up, but unless I missed it, the film didn’t get that right either. Meanwhile, Calamity Jane is there to the end, her mouth opening in a scream as the fatal shot is fired.
The facts surrounding Jack McCall beat all heck out of these fabrications of the film. He acted alone, and it was all over in the time it took him to walk across the room to where Hickock was sitting. Besides losing all his money to Hickock the previous night, McCall had been further humiliated when Bill tried to return some of what he’d won – offering in some accounts to buy McCall a meal. Also, he may have been motivated, like modern-day assassins we have known, to gain a reputation by killing a celebrity.
Altogether, he was a fish out of water in the West – the exact opposite of Hickock in every way. Retelling his story by bringing some psychological depth to existing myth and what we know of the facts would have provided a far more interesting and plausible film. If anyone in the story conferences thought of this, I’m sorry they got voted down.
So if you rent this movie, set the timer for a half-hour at the most and enjoy the retelling of Wild Bill’s public life up to the day he arrives in Deadwood. Then forget the rest.
Posted by Ron Scheer at 8:24 AM