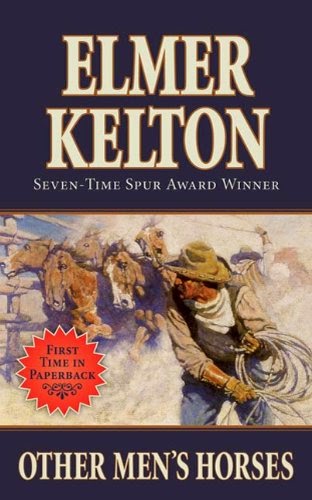 More and more, I think of genre writing as a game of cards. A writer gets dealt a few from the deck to make of them what he or she can, given some ingenuity, luck, the rules of the game, and the help of a wild card or two.

This is especially true of the western, which has long relied on a familiar formula, with its roots in the dime novel. A writer departs from that formula at some risk of losing an audience. You admire someone who manages to get away with it, and Elmer Kelton has been one of them.

Plot. Other Men’s Horses has several elements of a typical western plot: a Texas Ranger, horse thieves, a cavalry officer, a sheriff, a lynch mob, and a long pursuit over sparsely settled frontier. At the center of the story is Texas Ranger Andy Pickard, out to bring in a man for trial who has killed another man over the theft of a horse.

Pickard's life is unexpectedly saved by Bannister, the wanted man, who sees that he gets to a doctor when Pickard is himself shot. Given his duty to arrest Bannister, Pickard follows the man’s wife, Geneva, as she drives a buggy for many days across a stretch of 1880s Texas to meet up with her husband. Along the way, Pickard’s route crosses that of a Buffalo soldier, Joshua Hamlin, who is a deserter and on the run after avenging the death of one of his own men by whites.


There are a number of strong characters, including Mrs. Bannister, who demonstrates considerable grit as she travels alone from one frontier settlement to the next, managing in one case to outwit and rob an unsavory gambler with unwelcome designs on her, while finding other men—a pair of bachelor brothers—who treat her with kind and gentlemanly respect.

The band of horse thieves, once Pickard finally catches up with them, are well drawn, as Kelton includes in their number another woman, Emmy, who is tough as nails and thoroughly independent, cooking for the men in exchange for shelter and protection. A truly nasty villain, Tadlock, shows up as well, joining a brace of unpleasant types in the novel, introduced early on in the form of the Slocums, who are also after Bannister.

Storytelling style. So the novel is well populated by the good, bad, and ugly. Most interesting are the Bannisters, who are neither good nor bad, just resourceful in a world where a horse thief might keep a wife and remain strictly faithful to her, though he may leave her for long periods.

As Kelton structures the novel, it passes back and forth between the point of view of the pursued, Geneva, and her pursuer, Pickard. We traverse the same terrain twice as he follows her, sometimes losing her trail and finding it again, then having converged at the thieves’ camp, returning for a final confrontation with the Slocums.

Wrapping up. Elmer Kelton (1926–2009) was a prolific writer and winner of numerous awards. His novels The Day the Cowboys Quit (1971) and The Time It Never Rained (1973) are often mentioned on lists of top western fiction. Other Men’s Horses was his last novel. For many readers, including myself, what is distinctive about his fiction is his portrayal of character and the faith he keeps with history, which he typically gives as much attention to as plot.

In Andy Pickard, Kelton doesn’t give us the usual western hero, fearless and good with a gun. We get instead a young man who takes a risky job for the sole purpose of providing for himself and his young wife. For all his dedication to duty, the Rangers pay little, and he is away from home for weeks at a time, always vulnerable and capable of being killed or wounded while in pursuit of outlaws. He steps from the pages of western history, not myth.

The experience of reading Kelton is far different from the traditional western to be found in a writer like Louis L’Amour, where vulnerability often spills over into violence (see BITS review of L’Amour’s The Quick and the Dead), and catharsis comes as the hero kills the villains.

In Kelton’s novel, a villain is undone by a woman wielding a shovelful of burning coals. The shift away from convention is dramatic, but it has a ring of authenticity that makes the difference. The novel is also candid in its depiction of race and race relations on the frontier.

Other Men’s Horses is currently available in print and ebook formats at amazon, Barnes&Noble, and AbeBooks. For Friday's Forgotten Books, click on over to Patti Abbott's blog.
Tweet

Coming up: Glossary of frontier fiction
Posted by Ron Scheer at 12:00 PM