The Cowboy Rides Away


On April 11, 2015, Ron Scheer passed away after a long battle with cancer. Lynda—who Ron referred to as his life mate—said, "A blessing to know that he has flown high--like the hawk Anne recently watched in the desert, wheeling and turning on the wind--away from pain and struggle." I know I can speak for our online community in saying that we send our deepest condolences to his wife Lynda and children Anne and Jeremy.

Ron and I never met face to face. Our friendship was one born in the blogosphere. A comment left on his post here and a response left on mine elsewhere. That quid pro quo that often goes nowhere but sometimes crosses the transom into something quite special. Our bond began over five years ago when I immediately recognized characteristics in Ron that I respected, and my admiration for him only grew as the years went along.

What first stands out to any visitor to Buddies in the Saddle (BITS) is this blogger is a very gifted writer. I know we call them posts, articles, etc., but in Ron's hands these often became mini-masterpieces—layered essays deepening one's knowledge of a particular subject and leaving the reader eager to learn more about these passionate interests. And Ron wasn't just enthusiastic about Westerns, he also had an overflowing fountain of knowledge in art, photography, jazz, noir, foreign films, poetry, and literature from all corners, Old West lingo, current events, social justice, science fiction, and the list goes on. You know a top wordsmith when they can instill a thirst in you for a topic you hadn't previously thought you cared about—he had that natural, enviable ability.

Ron and I collaborated on several projects, starting when I asked if he'd be interested in writing a few words for a hardboiled anthology I was editing, and he penned the masterful introduction with the same zeal and perception he brought to his other work. But his first love in writing, clearly, was for the American Old West, so when Ron approached me about publishing his own essays dedicated to the early frontier authors and their novels, I was thrilled to do so. How the West Was Written was published in two volumes, with Spur Award-winning author Richard S. Wheeler saying, "I believe this will be the standard work on early western fiction." Without a doubt, it's Ron's knowledgeable, comprehensive voice we want to hear recalling those early days on the range. These are not dry academic missives, but, instead, a storyteller sitting around a campfire, thumbing his Stetson high up on his forehead, and connecting us to a fascinating history.

Continuing on this writing path leads us to the depth of a remarkable human being. In his blogging when he confronts death's first unwelcomed appearance, not only does Ron's courageous grit shine through but so does his ability to compose poetic prose while reflecting on his own mortality. In just one of many profound BITS entries, this from April 13, 2014, after he has lamented the state of endless wars, he takes solace in a treasured pastime, reading, "where killing and death are transformed into words on the page and real blood is not shed." He then adds:

In literature, the dead do not fall into an Eternal Silence, as do those who have actually lived and breathed. Gravestones do not mark the resting place of a lifetime of memories, locked away forever. Lives lived in literature remain at least partly open to us, unforgotten. I think of Joyce as getting at something like this in "The Dead." Spending a holiday evening with a gathering of people, all of them now dead and gone, we are touched by them, their loneliness and sorrows, their heart-breaking memories, their isolation, weaknesses, and failures, their bravery. Yet somehow the words on the page keep them from being forever snuffed out. At least some part of them is still remembered.


A man who writes with such vision is drawing from a deep reserve. Perhaps, an indicator—a signpost on the trail, if you will—to the origin of this wellspring can be traced, in part, to a lifetime of dedication and service to others.


Ron's M.A. and Ph.D. were from UCLA (and Lynda notes it's ironic he ended up at its arch rival USC to teach writing from 2000 until he retired around 2012). His first job was at Mansfield University in Pennsylvania where he taught composition and was excited about working a Head Start program for disadvantaged first-year students. As Lynda told me, there is a noticeable pattern of committed service running through Ron's career-from spending a college summer volunteering at the Behrhorst Clinic in Guatemala to coaching writing students in Watts, an area that had been, at the time, devastated by the 1965 "riots." It was also at Mansfield (1969-1983) where he discovered a life-long passion for film and developed an insight that we would eventually enjoy here at BITS. In 1983, he went on to post-graduate work at Carnegie Mellon, then left teaching to work at the advertising agency Siegel & Gale in NYC where he directed the language simplification projects for the agency's New York, London, and Los Angeles offices. Ten years later, he returned to teaching at USC until he retired.

This is a soul who left us far too soon, and we feel cheated and robbed by his absence. However, I'm reminded of the Greek poet Pindar who advised us not to aspire to immortal life "but exhaust the limits of the possible." I take stock knowing Ron's life was lived to the fullest. And in what became his twilight, he turned to blogging at BITS and writing and found a new outlet for his enthusiasm and creativity. Once again, Lynda opens a window for us:

"His world expanded as he dug into frontier fiction and met you all. After he retired from teaching, your community became a huge part of his life, a part that inspired him and engaged his most incredible mind. I believe that, by the time he got too sick to write, he felt fulfilled and validated." 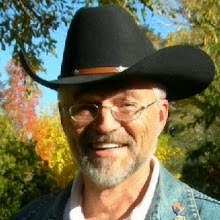 Ron, you were a wonderful, compassionate friend to us. A rapport started in cyberspace, true, but one that manifested itself into genuine, affectionate friendships. We will always picture you sporting that cowboy hat under which beamed that wide, inviting smile saying hello.

In many of the Western stories we admire, the cowboy rides away as the sun sets over the mountains with the child running after and left wondering why the hero has gone so soon. We, too, feel that way, but we're grateful that you left so much of your heart with us. We will stoke the fire you set, savor the words you left, and take comfort in your undying spirit.

You once handed me a beautiful sentiment that I will never forget. Now, I'm returning these cherished words to you, where they belong, dear friend:

"When they ask me if I knew any truly honorable men, I will tell them about you."