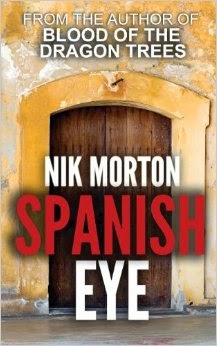 I know Nik Morton more as a writer of westerns. His Bullets For a Ballot was reviewed here a while ago. Spanish Eye is something else.

Nik is one of those Brits who left the dark, rainy North for the sunny south coast of Spain, which is where this collection of 22 stories, featuring private investigator Leon Cazador, takes place.

Like Henning Mankell and other writers of euro crime fiction, Morton shares what he’s come to know about crime and the criminal element in Spain, though never painting it as dark as writers of the Scandi-noir school. Against a background of social conditions in modern-day Spain, it’s petty crime mostly, systemic graft, and fraud that find their way to Cazador’s attention. Meanwhile, the menace of organized crime and mafia elements lurks in the shadows.

Cazador is a multilingual fellow, his parentage both British and Spanish. As in Mankell, et al., you learn plenty about social ills that would make prime fodder for investigative reporting in the major newspapers, while in the tourist and expat destinations along the Mediterranean coast where Morton’s stories take place they remain mostly invisible except to long-time residents and the police, who seem always ready to make an arrest given timely tipoffs from Cazador.

All offenders, regardless of the seriousness of their crimes are characterized by him as ”the ungodly”—a very Catholic point of view appropriate to a country with a history of extremes, from the Inquisition to Franco’s fascist regime, the latter of which gets frequent mention as Morton’s stories touch on memories of the Civil War.

A recent resident (for part of a summer) of Madrid, who came to enjoy that city’s laid-back culture, I felt some pleasant déjà vu in the world of Morton’s stories which are peopled by the men and women I observed there on the leafy avenidas, in the busy neighborhood plazas, and among the fountains in the parks.

The stories are often clever in their conception and execution. Reading them you get to enjoying Cazador's congenial, wise company. There is some reassurance knowing that while he may risk getting into trouble with lawbreakers, he is well armed and practiced in the martial arts.


Spanish Eye is currently available in print and ebook formats at amazon and Barnes&Noble,
Tweet