I have been meaning to mention that Richard Wheeler has begun blogging again after a long hiatus. His most recent news is that the Western Writers of America is honoring him with induction to the WWA Hall of Fame at their next meeting in Texas. After several Spur Awards, he was already chosen in 2001 for that organization's Lifetime Achievement Award, named for Owen Wister.


A man who has characterized himself at his previous blog as a “curmudgeon,” Wheeler can be counted on for sometimes prickly opinions on a wide range of subjects: the current state of the traditional western; the proliferatrion of creative writing programs; and author input to book cover design. Informative is his story of his own long-running Barnaby Skye series. His book reviews are generous in their praise for thoughtful writing. He can also be revealing in disclosures of his personal life, his health and state of mind, looking both back and forward at a long and productive writing career. 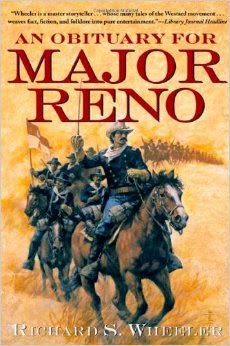 I have admired Wheeler’s historical fiction from my first encounter with it in his retelling of the Battle of Little Bighorn and the controversial role played that day by Major Reno, a commanding officer who, while under fire, failed to come to the aid of Custer and his company. That novel, An Obituary for Major Reno (reviewed here) is a wonderfully told and moving account of a complicated man living and dying in largely unearned public disgrace for which the narrator, a newspaperman, finds in his heart the capacity to forgive.

There is that theme in much of Wheeler’s fiction—compassion felt and expressed for individuals, despite their failures and shortcomings, or plain bad luck, as in his novel of Lewis and Clark, Eclipse (reviewed here, with an interview).

I had the good fortune to meet Richard Wheeler at a Book Festival in Missoula, Montana, a few years ago. I remember him as a gracefully tall man, almost diffident, and hardly the irascible curmudgeon he can be as a blogger. There he read from a detective novel he’d recently published set in 1940s Milwaukee, an enjoyable departure for him and his fans (reviewed here).

I encourage readers, and especially writers of frontier fiction, to “follow” his blog, Wheeler's World. Whether or not you always agree with him, a visit to his pages provides plenty of food for thought and useful advice—from a seasoned Hall-of-Famer.
Tweet