Summer about over. Thirteen days and I’m back in front of a classroom. And the time until then will begin to fill with updating syllabi and assignments and posting them online for the 57 students enrolled in my Advanced Writing classes. More about that as the time comes. 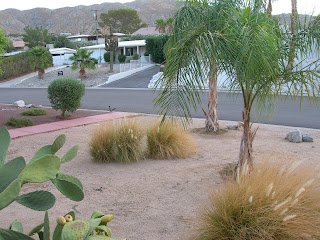 Today I’m kicking off with a pic of a roadrunner who visited my front yard on Monday. These guys don’t stand still for long or let you get close, so by the time I grabbed my camera, he was already making tracks. Here’s both a long shot (at right) and a closeup (below). 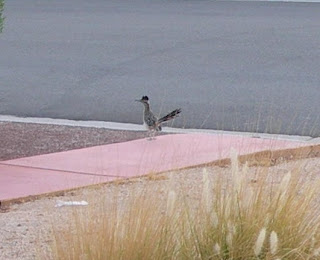 Roadrunners have a chuckling call that sounds like something mechanical. They are the size of a very skinny small chicken, with long legs and a long tail. Like the cartoon, they can move fast.
Meanwhile, there’s no moving fast through the amount of reading and research I’d like to accomplish. This summer I began focusing on early 1900s-era writers of westerns, and that list continues to grow. But blogging here with western historians and fiction writers, I’ve been drawn in other directions, too.
So this week I picked up Mark Lee Gardner’s To Hell on a Fast Horse, which is a well-researched historical account of Pat Garrett and Billy the Kid. I’ll be writing about that here soon.
Another book has been Richard Wheeler’s An Obituary for Major Reno, a historical novel about the Little Bighorn. I visited the site of that battle on an overcast spring day in early May two years ago, and was moved by the experience. I will post some of the pics I took that day when I write up a review of that book.
But back to the end of the summer, which puts me in mind of how the summer began. In May I made a four-day visit to Rankin Ranch for some rural relaxation and horseback riding. The ranch is located in the Walker Basin northeast of Bakersfield, California, in the southern Sierras.
I’m devoting this Casual Friday installment to some pictures from that visit. The ranch has been in the same family since the 1850s. From the beginning, they have raised Hereford cattle and were among the first settlers in this valley, which is surrounded by mountains. Native Americans of the Paiute tribe were here before them. [As usual, click on a pic to see it larger.] 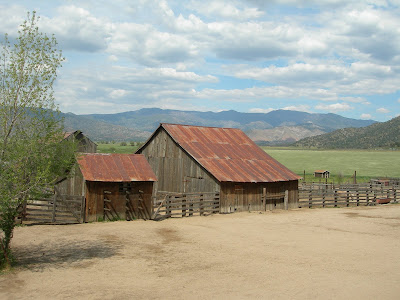 The cattle are now on grazing land elsewhere, and the original ranch buildings operate as a year-round guest ranch, with a large herd of horses for riding (corral and horse barns above). There are trail rides each morning and afternoon, sometimes across the pastures and sometimes into the surrounding canyons. Guests stay in separate cabins scattered through the pine trees, and there are three meals served each day. 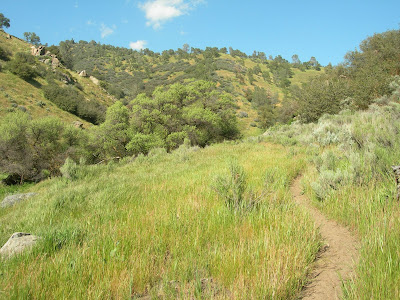 May this year followed a wet winter, and so the fields and trails were thick with wildflowers. The stream along the trail above was almost hidden under watercress. The nights were totally dark except for starlight and moonlight. A family of skunks had taken up residence in a drainpipe outside my cabin. I gave them a wide berth. The ripple effect across the hillside in the pic below is actually tall grasses blowing in a brisk wind. 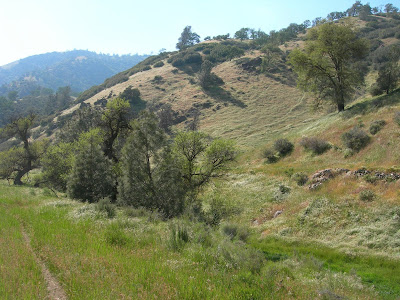 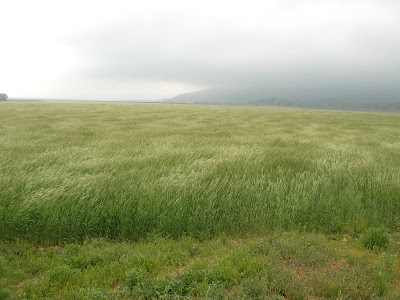 There was a beautiful large field of rye just down the road. I took a long walk before breakfast every day and caught that field in a couple of moods. One breezy morning, not long after dawn, it was like watching the waves of a stormy sea from the shore (above). The pic below was taken at sunrise on another morning. You can see my shadow stretching out across the grain, which is perfectly still. 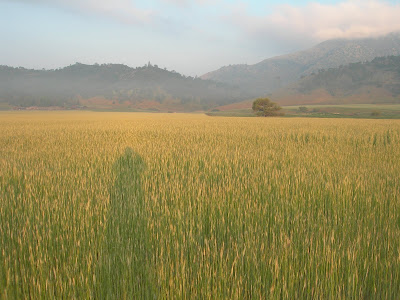 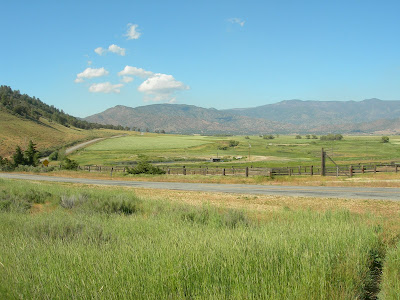 The pic above looks out over the pastures and cultivated fields of the valley. The one below was taken on another morning walk. This is pasture, with some remarkable, very old cottonwood trees. There’s a hay ride out here on a flatbed wagon twice a week and a picnic, followed by a horseshoe toss. (My partner and I missed winning the tournament by a single point. Too much pressure . . .) 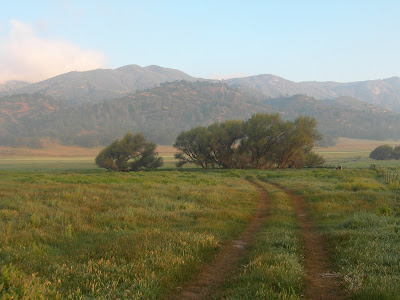 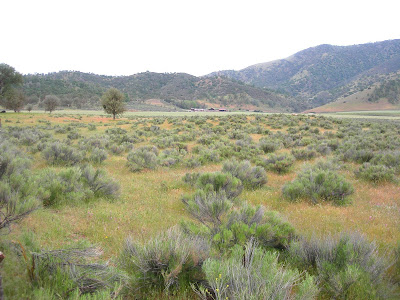 A pic of another early morning walk (above) shows the ranch buildings in the far distance. The pasture of a neighboring ranch, in the foreground, has filled with sagebrush. My last morning there, I took a drive around. Wherever I’ve been in ranch country, I’ve seen these clusters of homemade directional signs (below), and I’m usually stopping to take a picture as I did this time. 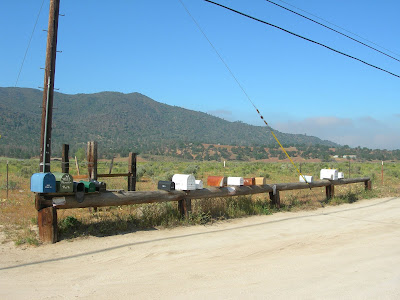 Also, as an old farm boy, it’s hard to pass up a row of snail mailboxes (above). The mailbox a half mile down the farm road where I grew up, with magazines and letters from pen pals, was my one contact with the outside world. So the sight of country mailboxes is cause for more than a little nostalgia. Last, in a burst of bright yellow, difficult to capture with a camera, is a bunch of California poppies, which could be found just about everywhere around the ranch this year. 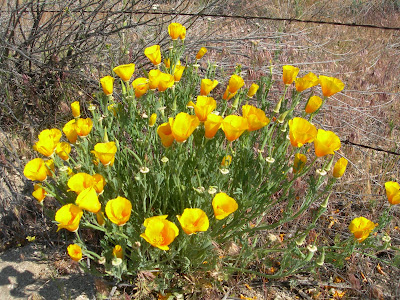 Coming up: Western short stories made into films