Back in the saddle again. I started a two-day seminar for incoming freshmen on Thursday afternoon. It’s one of 55 of these, no credit, just kind of “added value” for the class of 2014, and a taste of being up close and personal with a prof for a couple days before getting thrown in at the deep end of university undergraduate classes.

I could guess what they’d be like. Bright, talkative, full of ideas. Behind the appearance of confidence, they’d be nervous and maybe unsure of themselves. As for me, I had my own nerves as I always do before the first day.
The seminar is called “The American Cowboy: Hollywood Myth and Reality.” I waited until the last couple of days to decide what to do for them. I settled on The Cowboys with John Wayne for Thursday and Open Range, with Costner and Duvall for Friday.
We’d look at the first scenes, and then rewatch them a couple times, stopping to peel away the layers of myth and history and what seems to lie in between. I have DVDs, my laptop, and the video projection system in the classroom.
I wore my Levi’s, a Lucky western shirt, a very old pair of Tony Lamas, and a straw cowboy hat. The hat was mostly for the shade. We’re having the usual August heat wave in LA.
I was given an initial roster of seven students. I was told there might be more. Fourteen showed up. About half guys and girls. I always ask students where they’re from on the first day. These kids were from all over – North Carolina, Chicago, Providence, Houston, Austin, various places in California. One was from Germany. Two were brothers. “We’re triplets,” they told me, their third brother at another school.
The video system worked beautifully, and I was able to get the room dark enough. There was a handout with a bunch of questions as a fallback in case discussion was slow. I never had to consult it.
They all seemed to have something to say and should have been pleased with themselves as they were making all kinds of nifty observations.

They observed how there’s a melancholy tone in the opening scenes of The Cowboys and commented on the vast, flat, empty landscape behind Wayne as he talks to the hands who are leaving him for the gold fields. They saw in this the theme of the isolated individual who has to make it on his own. One student characterized this as “American” in a way I’m not used to hearing my students use that word.
Not to mention their unexpected connections. One student recognized Slim Pickens in the film but didn’t know his name. “He’s the guy who rides the bomb in Dr. Strangelove,” he said. So here is an 18-year-old familiar with a film from 1964. These days, you never can predict what students will know. Here they all are: 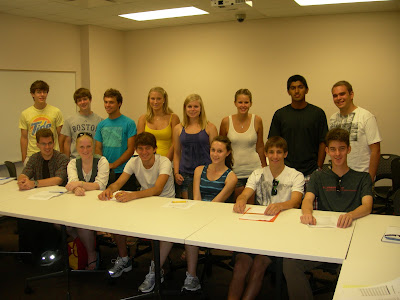 As usual, 90 minutes flew by, and when it was done, I felt like we’d covered maybe 10% of the material.
And so passed day one. Back in the saddle.