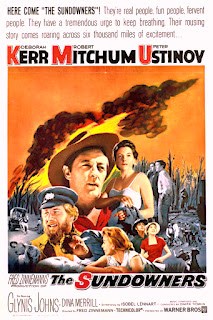 Not quite a western, this story of an itinerant sheepman and his family in the great outdoors of Australia has stood up well. The enjoyment comes mostly from the performances and the novelty of watching something besides cows being driven across country. The work of sheep shearers and their camaraderie make another contrasting parallel to the usual run of cowboys.

Plot. Robert Mitchum and Deborah Kerr play a couple who have been together and working sheep long enough to raise a son (Michael Anderson, Jr.), who is now a teenager. As the film begins, they are joined by a fellow drover (Peter Ustinov), an Englishman with history as a seaman who is currently down on his luck.

Kerr and the boy yearn to settle down on a farm, but Mitchum is happy living out of a horse-drawn wagon and a tent. By temperament he’s a drifter and not the sort to save enough money for a down payment on any kind of property that would require him to stay in one place. He’d rather be drinking up his earnings in the local boozer and singing Irish songs.

He is finally persuaded by Kerr to take a job with a company of shearers, and she hires on as the cook. It turns out he is quite good at separating sheep from their wool. His co-workers eventually talk him into going one on one with another shearer in a contest where they expect to win big on side bets. Instead, Mitchum is beaten by an old man who looks deceptively past his prime.

His luck turns in a two-up game at the hotel bar, and he wins not only a fistful of cash but a racehorse. With his wife’s savings, they are close to making a down payment on a farm she has fallen in love with. With their son as jockey, the horse starts winning some races, but there’s a final turn of fortune that puts them back on the road again.

In a couple of subplots, Ustinov takes up with a hotel owner (Glynis Johns), and Kerr befriends a sheep station owner’s lonely young wife (Dina Merrill). The two of them give shelter to a third woman, the very pregnant wife of one of the shearers. And a baby is born without benefit of a doctor.

Four stars. The film gets one star for each of its leads. Mitchum is his usual self, comfortable in his role as a man among men, tough and determined but easy-going. He has a serviceable Aussie accent that works well enough for this American ear though he hardly sounds like Russell Crowe, and it probably rings pretty false to an Australian.

Deborah Kerr is the biggest surprise. She relaxes into a role that is so unlike the starched and repressed women I remember her playing. She and Mitchum are well matched in both their disputes and their lovemaking. Their moments on screen together are captured beautifully in this video:

Ustinov is a pure pleasure, and you realize what a presence he had on screen, for his ability to wring both the humor and poignance out of a simple line of dialogue. Glynis Johns is a whirlwind of comic energy as she bustles about as hotelkeeper, barkeep, and happy recipient of Ustinov’s attentions.

I credit director Fred Zinnemann (High Noon, From Here to Eternity, A Man for All Seasons) for each of these low-keyed, natural performances as well as the way the cast clicks together. There’s a gentle touch in the film from beginning to end, and today it would be marketed as a family movie, with probably a PG rating. It maintains an upbeat tone, even as clouds sometimes gather, without diminishing the human drama.

In structure, the film is episodic, with complications that arise and are then soon resolved, like a brush fire during a sheep drive that threatens and separates them for a while. But after a moment of worry, Kerr rides off to look for Mitchum and eventually finds him, unscathed.

Is it a western? The film has many of the conventions of the genre, including plenty of outdoors footage, often highlighting the flora and fauna of Down Under. Travel is mostly by horses, and there are saloon scenes, gambling, and fistfights. What the film lacks are villains and gunfights. Nobody gets shot and nobody dies.

But what surely marks it as western is its romantic attitude toward itinerant workers. A sociologist might deplore their living conditions and their poverty, especially the lack of prospects for the couple’s son, who is getting little or no education. Cowboys or sheep drovers, they are typically portrayed as having escaped the burdens and responsibilities of being wage-earning, tax-paying property owners. In the movies, they get to live a life of independence and freedom. But it’s a fantasy that mostly wage-earning, tax-paying property owners can afford.

Wrapping up. The film put me in mind of Ivan Doig’s memoir Heart Earth, about his parents, who were sheepherders in Montana in the 1940s. The way of life he remembers as a boy is much like that of the characters in Zinnemann’s film. Also, the documentary Sweetgrass (2009) about modern-day sheepherders in Montana’s Beartooth Mountains provides an interesting comparison.

The Sundowners was based on a novel by Australian writer Jon Cleary and adapted to the screen by Isobel Lennart. Exteriors were filmed on location in New South Wales and South Australia. Interiors were shot at Elstree Studios in England. The film is currently available at netflix and at amazon and Barnes&Noble. For more of Tuesday’s Overlooked Films and TV, click on over to Todd Mason’s blog.

Coming up: Cowboy names, no. 2