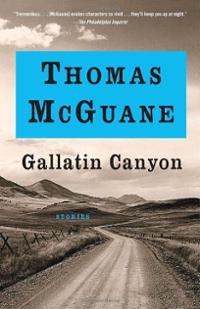 I sat recently with an auditorium full of appreciative folks gathered in Missoula to hear McGuane read one of his stories. The laughter in the darkened house was broad and genuine, and afterwards the lobby was jammed with people waiting for their turn at the autograph table. The man has that effect—part celebrity, part entertainer.

The story was one of his patented ironic introductions to characters shambling through life in a comic world overflowing with stuff, like a hoarder’s garage. It’s really not so much a story even. The characters are so specific that they come with their own biographies, and the narrative is often more about everything that’s led up to the present moment.

A story may shamble on indefinitely, a compendium of back-stories for their own sake, and all the time sort of amused by the arbitrariness of people’s lives. Sometimes those lives have derailed long ago, and the characters are still plugging along, a little disoriented but believing that meaning can still be salvaged from it all.

Gallatin Canyon is like that, a collection of ten stories, one of them long enough to be a novella. Some take place in McGuane’s Montana. The aptly named novella, “The Refugee,” is mostly set on a sailing boat in the Caribbean. “The Miracle Boy” concerns a family gathering in an unnamed New England city, Boston or Providence. In “Ice,” a boy sets out to skate across the frozen surface of Lake Erie.

Alcohol tends to figure prominently, sometimes drugs. In “Aliens,” a divorced couple has a dispute over a collection of commemorative whiskey bottles. Two backpackers in “North Coast” trade purloined native art for heroin from a Sikh dealer in Vancouver. Not surprisingly, the occasional character has a criminal history.

“Cowboy” turns out to be a life story, told in the flat vernacular of an ex-con who gets work with a Hereford stockbreeder and his sister. As years pass, the partners die off, and the cowhand ends up with the business. The story ends as it began with a refusal to let a saddle horse get sent to a slaughterhouse. The brilliance of the storytelling lies in how it captures the matter-of-fact mindset of a man who spends his life in the precisely defined world of a “goddam ranch.”

Taking a turn on similar material, “Old Friends” tells of an old college friend who comes to Montana with the idea of starting a new life as a cowboy. The cards are pretty much stacked against him, as he is already in his 70s, and he is on the run from the feds, who eventually catch up with him. You might feel some sympathy for him, except that he is mindlessly rude to everyone, including his old friend.


Rudeness, in fact, is the source of the grim hilarity in two other stories, as well. A daughter’s bitter welcome for her widowed father in “Aliens” is so heartlessly bruising you can’t believe she sprang from his loins. The carping Irish family that gathers at the home of a dying grandmother in “Miracle Boy” is a cold war of cutting remarks and mockery. The conflict consumes not just those with shared DNA. Spouses get their share of the collateral damage.

The novella, “Refugees,” deserves note for its nail-biting account of a sailing boat in a violent tropical storm. The single occupant is a man haunted by a past that drives him to blinding drunks and other desperate measures. “Cowboy” is an interesting example of how our perception of a character shifts as we learn more about them. In that example, it's only at the end that we learn the narrator is an ex-con who shot a man.

In “Refugees,” something similar happens as the circumstances around the drowning of the main character’s best friend are slowly revealed. Like people in real life, learning of their missteps and failures in the past colors our opinion of them. The less we know about them sometimes the better.

Gallatin Canyon is thoughtful, perceptive, and sometimes laugh-out-loud funny. It is currently available at amazon, Barnes&Noble, and AbeBooks, and for kindle and the nook. For more of Friday's Forgotten Books, click over to Patti Abbott's blog.
Tweet