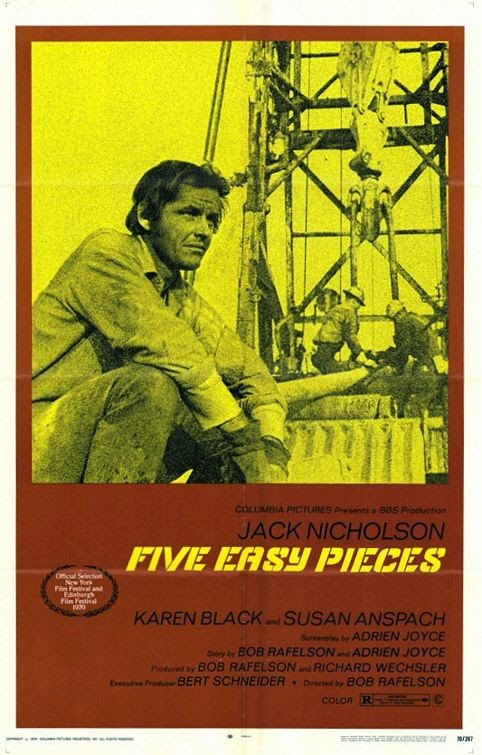 He is currently working as a roustabout in oilfields not far from Bakersfield, California. He has a live-in girlfriend (Karen Black) with musical aspirations of her own—to be a country and western singer. (There are Tammy Wynette songs on the music track.) His best buddy (Billy Green Bush) is married, but the two men happily drink nights away, or they hook up with a couple of unattached females (Sally Struthers, Martina MacGuire) that Nicholson meets at a bowling alley.


Plot. When Bush is arrested for robbery, Nicholson heads up the coast to Washington, taking along Black and picking up two other women (Helena Kallianiotes, Toni Basil) whose car has overturned at the side of the road. Leaving Black at a motel, he drives to the family home on an island in Puget Sound. There he persuades a house guest (Susan Anspach) into bed but does not like her assessment of him, that he is emotionally empty and unable to love.

On a walk with his aging father, wheelchair-bound and unable to speak after suffering two strokes, Nicholson admits his failings as a son in a tearful monologue to the silent older man. Back on the road with Black, he abandons her at a truck stop, where he catches a ride with a trucker, heading for Alaska.

Frontier ethos. It’s not hard to see Nicholson’s character as one in a long line of drifting western heroes, most of them loners who are estranged from family and far from home, always moving to some new frontier, abandoning attachments, especially to women. It’s a rough life, with no commitments, a two-fisted, hard drinking, tough exterior masking any vulnerabilities.

The story is told with the modern-day West as a backdrop—the arid lands of the oilfields and the woods and waters of the Pacific Northwest. As in frontier fiction we have seen here earlier, this world is an opposite to the sophistication of the East, represented by concert musicians, polite dinner conversation, and some high-minded intellectual snobbery that a not so polite Nicholson calls “bullshit.”

He also represents a westerner’s aversion to Eastern high-stress urban lifestyles and the prevalence there of rules and regulations. The film dramatizes this in two iconic scenes. In one, when Nicholson and Bush are stopped in stalled traffic on a freeway, Nicholson leaves his car and climbs onto a mover's truck to play an out-of-tune piano. Another is the well-remembered diner scene, where Nicholson is prevented from getting a side order of toast. We also get it in the relentless harangues of his backseat passenger, Kallianiotes, who sees the populated world and the people in it as “filth.”

Meanwhile, what the movie portrays is the exhaustion of the myth of Western expansion. The frontier continues to recede and offers only an illusion of escape from civilization’s discontents. Nicholson’s character in the end may have shrugged off a situation he can no longer abide (his girlfriend is pregnant, and he clearly does not want to be married), but riding off into a fog, as he does, he has no hope of improving his lot in life.

We get a similar deflation at the end of Shane, as the gunman moves on, unable to stay where he might have put down roots and made a home. But for Nicholson’s character, there is an emptiness in his soul that will follow him wherever he wanders.

Wrapping up. It’s worth remembering that the film is a product of its time. Made during the Vietnam War, it reflects a crisis of a divided nation’s spirit. Its ambivalence can be found in the downbeat tone of other Hollywood movies of the time, e.g. Easy Rider (1970) and McCabe and Mrs. Miller (1971), or the off-beat humor of M.A.S.H. (1970).

Still, it holds up well for its age, despite its occasional 70s-style languors, where a modern-day editor would cut more to the quick. Anyway, it’s a pleasure for a change to watch a film that lingers on moments for its effects. A lovely example comes as Nicholson plays a short piece by Chopin, as the camera slowly pans in closeup from his hands on the keys to the listening Anspach, then across a wall covered with family photographs and back to Nicholson again.

If anything about the film has improved with time, it’s Karen Black’s performance. She gives dignity to her diner waitress character that could easily have slipped over into caricature. A fish out of water with the social circle who gather at the family home, she exhibits an honesty and integrity that deserve better than what the film gives her in the final scene. Also memorable are Nicholson’s scenes with Lois Smith, who plays his sister. Here's a scene from the film:

Five Easy Pieces is currently available for instant viewing at Netflix and on DVD at amazon and Barnes&Noble. For more of Tuesday’s Overlooked Movies and TV, click on over to Todd Mason’s blog, Sweet Freedom.
Tweet