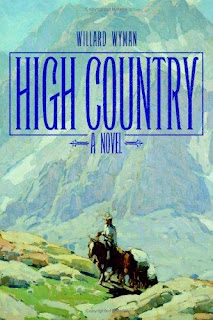 This novel sets out to be a character study about a man who lives and works as a packer in the mountains of Montana and California. Ty Hardin takes his first job leading a string of mules in the Swan Range north of Missoula. He’s a teenager with no trail experience and only an aptitude with animals.

It’s 1937, and from his first boss, Fenton, he learns a love of the mountains that is next to mystical. Lifted there high above the everyday concerns of everyday folks, he is at home. His quiet strength, work ethic, and finely tuned skills eventually make him a legend among his peers.

Character. A character study succeeds to the extent that it finds ambiguities and complexities in its subject. Since no one is perfect, it shouldn’t be surprising to reveal a weakness or fault. But Wyman’s portrayal of Ty tends to be worshipful, and where his halo may slip a little, it’s easily excused.

Wyman celebrates a kind of character we associate with traditional Western values. Ty represents an ideal of individualism and self-reliance that also honors a code of responsibility to others. He may pass an evening at the town brothel or fly into a rare rage when another man insults his dance partner. But he has been stripped of every bit of human meanness.

Instead, though surrounded by admiring friends and colleagues, he is haunted by a soul-deep loneliness. Loving intimacy with a woman mostly eludes him. Wyman grants him brief moments with women who must first overcome his natural reserve, but the lingering after-effect is to ravage his heart.

You don’t have to believe that such men exist to enjoy this novel. Ty’s presence is always persuasive. He is most believable in the scenes that are life threatening – getting lost in a snowstorm or swept away attempting to rescue someone who’s fallen into a swollen river.

But the overall tone of the novel is sentimental. Not that there’s anything wrong with that. It simply glosses over much that readers know about human life. Wyman leaves us feeling in awe of the man, and for many readers that’s enough.

Love and other scenes. This may come as a surprise, but something Wyman does particularly well is the writing of love scenes. He is unabashed about building sexual tension and then putting passion convincingly into words.

His women are usually the seducers, but when the men fall, they fall hard. They are undone by a flood of confusing emotions and desires, distracted during the days, and sleepless at night.

Horses and mules, not surprisingly, turn out to be more constant in their attachment to men. Wyman brings them to life as personalities in the novel, and you find yourself caring nearly as much for their welfare as the humans. The book also captures well the experience of riding over high-altitude terrain and in daunting weather conditions.

There really is no plot. The story covers the years 1937-1984. With the exception of a few years in the service during WWII, Ty is in the mountains every summer. The same people work with him, as they pack and trail in supplies for hunters, dudes, and firefighters.

The latter years are spent in California’s Sierra Nevadas. Here Wyman spends more time describing the high country west of the Owens Valley, along the Kern River, and around Mount Whitney.

The end of the novel becomes a litany for the disappearance of mountain solitude. In the final chapters, the mountains are filling with hikers, vacationers, and other invaders. Only the highest, most inaccessible areas are left for old-time packers like Ty and his friends.

Wyman knows his subject, having worked during his life as a wrangler, guide, and packer. His book calls itself fiction, but there is the strong feeling of documentary about it. It is a record of a time and place when wilderness in the West was still wild.

High Country is available at amazon