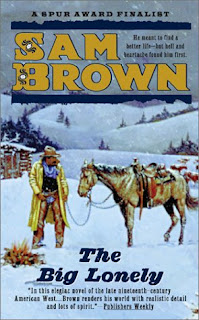 I picked up this western novel from 1992 at the recommendation of Richard Wheeler, who knows his western writers. Sam Brown, the jacket flap says, is a working cowboy who makes his home in Adrian, Texas. That’s in the northern Panhandle, mid-way between Amarillo and Tucumcari, New Mexico.

This novel, in fact, takes place there, in the Canadian River basin, just north of the Llano Estacado. The year is 1887. There’s plenty of action in the novel, but it also wants to consider some ideas about what it was to be a working cowboy in those times.
You don’t expect a western writer to get “existential,” but Brown ventures fearlessly into that territory, starting right from the title. The novel is about loneliness and what that feels like to a man whose occupation has made him a drifter.
Male bonding. A man’s co-workers can be a palliative, and the central character, Casey Wills, has three cowboy pardners at the novel’s beginning. They’ve spent a long summer on roundup, working for the XIT.
They are a congenial unit of camaraderie, disguising their emotional dependence on each other with constant bantering and teasing. No matter what one says, another has a snappy comeback as self-defense and to keep the other in his place.
Meanwhile, when one gets in trouble, it’s all for one and one for all. Which is how they all end up in the Tascosa jail before they’ve had a chance to spend their summer wages. And all of that goes to pay fines for disturbing the peace and cover damages to a saloon where they’ve been in a brawl.
So by page 40, they are broke, winter is coming on, and only Casey and his pal Josh are still employed. They’ve been hired on by the XIT to man a line camp. Their friends Johnny and Ab are let go, and there is a quick, unsentimental goodbye as they part. 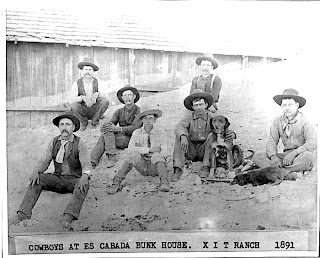 Changing times. It’s goodbye to the Old West, too, as big outfits like the XIT are putting up barbed wire fences and putting an end to the open range roundups. Ownership of ranching operations has also passed into the hands of Eastern capital, and cowboys are finding themselves under new management.
The business of cattle raising is being run more like – well, like a business. Decisions about how to run that business are being made by managers in Chicago and elsewhere, who don’t know one end of a cow from the other. Trying to treat cowboys like they are factory employees, they stir up plenty of resentment and resistance.
Such is the situation at the XIT. It’s no longer enough to live by one rule: “you take care of the outfit’s cattle like they were your own,” as one of the cowboys puts it (p. 175). There are a host of new “rules” to observe, and Casey and Josh quickly run afoul of them. By page 84, both of them are out of a job, too.
So far, I should point out, hardly a shot has been fired. And that is pretty much the case until the last chapters when, like The Virginian and Trampas, the novel’s villain forces the hand of our hero.
Hero and villain. Actually, these two terms carry too much weight for Casey and the man he finds himself up against. Tatum Stagg is a smart, congenial cattle rustler who’s been paying line riders to look the other way when he runs off XIT beef.
Casey stands on principle when Stagg offers him the usual deal, and Stagg leaves him a wad of bills anyway, figuring he’ll come around. But Casey doesn’t, attempting more than once to retrieve stolen cattle, even after he’s been fired. Eventually, Stagg runs out of patience and it’s Casey’s turn to pay.
For all his cowboy principle, Casey remains no more than a cowboy in his own eyes – proud that he’s preserved his integrity. Meanwhile, Stagg is more businessman than sociopath. As he points out, the cattle he steals from a mega operation like the XIT won’t even be missed. So what’s a little money under the table?
The woman. All of this might be a straightforward conflict of values, but Brown throws a female into the mix. And that is enough to get a whole different set of hormones flowing in our cowboy’s bloodstream.
Lily belongs to Stagg when we first meet her. He protects her and keeps her from a life of prostitution. But he also expects favors in support of his illegal affairs that involve compromising herself. Until she meets Casey, she’s willing to settle for this arrangement.
Casey falls for her in a big way, then has to keep adjusting his estimation of her as he learns more about her. Her feelings about him go through similar gyrations. By novel’s end the two of them have some big choices to make that either will or won’t lead to a happy ending for them – not to mention the reader.
Wrapping up. I thoroughly enjoyed this western novel. Brown’s cowboys are totally believable in the way they talk and behave. You know that Brown has lived and worked among men just like this. He also sets his story in the historical past, not a mythical one.
As a story, it owes a lot to Owen Wister by way of Elmer Kelton. Like those writers, he portrays real human issues about building and preserving character. Love, friendship, loyalty, integrity, self-respect, work, death, and doing the right thing, these issues are timeless. Or at least they should be, which is the subtext of traditional western fiction.
Brown sets the human drama in the Big Lonely of the western landscape, but the modern reader, in the Big Urban Lonely can easily identify. While today’s reader may feel an experience of escape into the past, what’s to be found there is the unchanging human condition: needs that are often in conflict with each other and with the often unyielding realities of the world we live in.
The Big Lonely is available at amazon and AbeBooks.
Image credits:
Coming up:
Posted by Ron Scheer at 6:06 AM