Kate and Virgil Boyles,
The Homesteaders (1909) 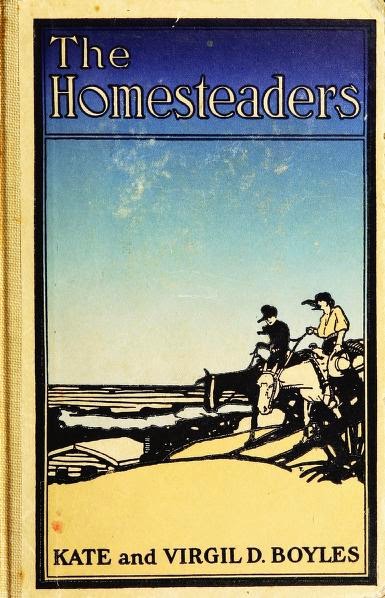 Brother and sister writing team, Kate and Virgil Boyles, followed their first novel Langford of the Three Bars (1907) with this one, both set on the South Dakota prairie near the Missouri River. The homesteaders of the title are also a brother and sister, Josephine and Jack Carroll.

It’s the early 1890s, and their story concerns their difficulties as newcomers from the South, invading the open grazing lands of a nearby ranch, the 7-Up, whose foreman, Tom Burrington, takes an interest in them and falls in love with Josephine.

Plot. The central conflict in the novel involves a villainous troublemaker, LaDue, who lives on a wooded island in the river and cuts timber, as well as operating a ferry crossing. He takes a dislike to the Carrolls and tries to drive them away, stealing a cow and a calf and then hiring a Texas cowboy, Henry Hoffman, to shoot Josephine as she brings her brother’s small herd of cows in from pasture for the night.

Tom comes on the scene in time to prevent any harm to her, but later, Jack himself is shot and killed while sitting in the doorway of his cabin. As Josephine rides to town for help, she is pursued by the same Henry Hoffman. Waiting off the trail, she takes a shot at him herself before Tom Burrington comes once again to her rescue.

Romance. Tom’s feelings for Josephine are in early evidence in the novel. Aware that she is in some danger as long as she lives on her brother’s isolated homestead, he is overcome with concern for her and yields to a rush of emotions, kissing her hands as he stands beside the horse she is riding.

Josephine is oddly reserved in his presence, though both she and Jack have owed their lives to him. In an early chapter, he found Jack with a broken leg and freezing in a winter storm. He also rescued Josephine from drowning after she fell through ice on the river.

However, she believes she has reason to distrust him and his honor as a gentleman. When she thinks he is withholding important information from her and her brother about their safety, she suspects Tom of disloyalty to them as fellow members of the same high-born class.

Character. Meanwhile, we know that Tom Burrington is not only of exemplary character. He is expert in the skills that make him a top hand. At a Wild West celebration near the Lower Brulé Agency, he is persuaded to enter a roping competition despite his protests that he is out of practice and wagerers will lose any money bet on his beating a champion roper from another ranch.

But even though LaDue tampers with his saddle rigging, causing a fall, he beats the other rider by two seconds on a second try and wins the event. He’s not your average cowboy. At novel’s end, Tom is also the bringer of justice as he confronts LaDue, gets a confession from him, and in an exchange of gunfire, Ladue is killed.

All that remains is for Tom to win over Josephine, who continues to mourn the death of her brother, an “uncanonized martyr to civilization,” while without good reason, she holds Tom responsible for his death. After Jack’s body is taken back East for burial, she returns to the homestead and is joined there by a mixed-blood Dakota Indian woman, Onjijitka (Rosebud), who has promised to be a “husband” to her, helping with the fieldwork and the livestock.

A curious invention, Rosebud has been to school where she has learned white ways: to read and write, sing and dance, embroider, play piano, and wear a corset. Despite her hopes, these have not won her acceptance as a white woman, which has left her embittered by white racial prejudice.

Though Tom confesses his love to Josephine, she is determined to be an independent homesteader, finishing what her brother started. When Tom objects to the two women living alone to work the homestead, he says he will return in eight months to ask for Josephine’s hand in marriage. She replies coyly, “Let’s cross that bridge when we come to it.”

It’s a curious ending for a western story where a handsome cowboy is left empty-handed despite his best efforts to win the heart of the girl he loves. But sometimes on the frontier a young woman’s priorities must prevail, and romance has to wait its turn.

Now that the villains are either dead or doing time, there is peace in the valley, and having learned how to use a gun and ride astride a horse, a woman, or two women in this case, don’t need a man around for either protection or company.

Wrapping up. Kate and Virgil Boyles grew up in Yankton, South Dakota, their father a prominent lawyer, judge and territorial legislator. After education at Yankton College, they collaborated as writers of five novels, all of them set on the South Dakota frontier. As a court reporter and trained in the law, Virgil provided the legal groundwork for their collaborations, but there is evidence that Kate was the main author of the novels they produced together.

The Homesteaders is currently available online at google books and Internet Archive, and for the nook at Barnes&Noble. For more of Friday’s Forgotten Books, click on over to Patti Abbott’s blog.
Tweet

Further reading:
BITS review of Langford of the Three Bars (1907)

Image credits:
Illustrations from the novel by Maynard Dixon