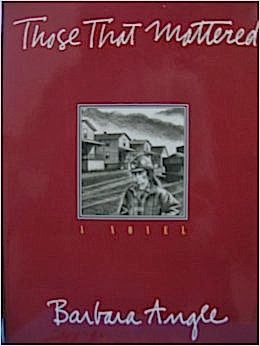 More common are stories about mining communities and their social life centering on a favorite saloon or among the wives of the miners. Two novels, A. B. Ward’s The Sage Brush Parson (1906) and Mrs. Wilson Woodrow’s The New Missioner (1907) recount the affairs of clergy in their midst.


For vicarious experience of blasting a way through a mountain, you have to turn to Frederick Ritchie Bechdolt’s The Hard Rock Man (1910), which gives a thrilling account of constructing a railway tunnel. It portrays not only the danger of collapsing rock and working with dynamite but the camaraderie and rivalries that grow among the men.

Plot. Blend all of these threads and mix in some of Michael Cimino’s The Deer Hunter, and you have something close to Barbara Angle’s autobiographical coal mining novel, set in modern-day West Virginia. It tells the story of Portia Crowe, from her years as the young daughter of a coalminer to her adulthood, when as a minister’s wife and holder of a college degree, she takes a job in the mines as one of the first women to work below ground for the mining company that is the town’s chief employer.

It is the 1980s. A lot has happened since the turn of the century. For one thing, mineworkers are now unionized. The work is mechanized, better paid, and marginally safer, while accidents still take lives, and coal dust still blackens lungs. One thing that has not changed, however, is the prejudice against women. Portia is harassed by the men she works with and the novel’s faithful recording of unrelenting verbal abuse directed to her is graphically sexual.

All attempts to break through her tough exterior, however, are in vain. She perseveres and overcomes even a major error in judgment—inviting a sexual liaison with one of the mine’s foremen, which results in a pregnancy. By novel’s end, she might still have been working in the mine, but she is injured in an accident that nearly costs her an arm.

Themes. This is a high-powered novel, a jolt of realism that vividly captures the lives of coal mining families who depend on the uneasy relationship between the mine owners and the union to keep the paychecks coming that put food on the table. This simmering distrust filters into the town bar where men excoriate their employers while drinking up a share of their wages. And it finds its way into their homes, where a father and son may have heated differences over the effectiveness of violence and strikes to get concessions from the mine owners.

Angle also offers an unforgiving portrayal of growing up female in such a community, where the lives of both men and women are ground down by lack of opportunity, blighted living conditions, and the demands of hard physical labor. All this adversity, as Angle describes it, is met by a fierce pride in oneself and one’s family that refuses to be subdued or pitied.

Men. Though a story about a woman—and a determined, independent one at that—the novel devotes much of its attention to the men in her life. From almost the start there are the begrimed men with callused hands who gather after their shift at a tavern in town, a rough drunken environment where she hears coarse talk and Rabelaisian humor. In the book’s final sections, they become the fellow miners who attempt to break her spirit and drive her from her job.

The tenderest chapter in the novel describes the relationship between Portia and her father, who is later killed in a mining accident. The loss of his greathearted presence and his gentle humor leaves an aching hole at the center of the novel. Other men in her life are the boy she falls hopelessly in love with in high school, the mining shift foreman who loves her and leaves her, and her coalminer grandfather, tough as old leather until the last hours on his deathbed.

Those That Mattered is currently available at amazon, Barnes&Noble, and AbeBooks. For more of Friday’s Forgotten Books, click on over to Patti Abbott’s blog.
Tweet