With more energy again to walk the dog, I have been on treks into the desert of 45-50 minutes. I got lucky on Thanksgiving, and my taste buds were in working order for a turkey breast from Clark's and several homemade trimmings, including pumpkin pecan pie.  The next day, however, my taste was on strike again. No joy of leftovers.

Meanwhile, attention continues to drift. I am used to having projects to focus on. But there's always now a "so what?" attitude lurking on the fringes of awareness. Putting together a glossary of frontier fiction, I thought I was getting near the finish point. Then I began discovering problems in the file of the complete text that I don't know how to fix, one of them being the refusal of my printer to put out a copy that I can proofread.

In the past, I would have risen to the challenge of figuring out how to solve this problem. Now I'm thinking, do I really want to spend the time it takes to do that? There's a judgmental (probably Lutheran) voice inside asking, how lazy can you get? But I'm hearing another saying, OK I'll figure out something, but not today.

So I lie down and tune into YouTube for anything that might take me away for a while. I listen to some Berlin techno out of curiosity and ruminate on how before cancer I might have actually got excited about traveling there or anywhere new and different. In this isolated desert town, life is often pretty clearly elsewhere. I remember spending a month in Madrid a few summers ago, just wandering the streets and becoming a regular at a neighborhood bar, where I could speak my little Spanish, nibble on free hot snacks, and watch bullfighting on a big flat screen TV.

And part of me begins wanting to muster the energy for that, deciding whether there is money for such an excursion, renewing my passport, overcoming the usual resistance to what would have seemed an extravagance only a year ago. To heck with publishing a book that may or may not ever be used by anyone.

Still on YouTube, I try some guided meditation videos and wonder at my resistance to what should be a  purposeful use of time and energy. While there are brief moments of relaxation and letting go, there is this ongoing debate between the new and old normals. To be here now sounds like it should be touched with pleasure, if not joy. It sounds like what should be a release from everything stressful, something like a month in Madrid. But it's not.

It's hard work and rewarding in hardly any way that I have been able to fathom. When you can hear the meter ticking in one's own taxi ride through the universe as we know it, the spending of time on something that is the equivalent of watching paint dry seems a waste of a very personal and limited resource. Paying attention to whatever pops up in my admittedly noisy mental sphere often seems more like being a real live human at the moment. (I know a Zen master would tell me I've got this turned around, but I'm saying, so what?)

And I listen to videos of Pema Chödrön, my favorite Tibetan Buddhist, who makes me laugh, and reminds me, like Anne Lamott, that laughter is often the best medicine. While she talks about spiritual practice, the message is pretty much "This is important, but don't always take it too seriously." And I am grateful to her for that. (Click here to listen for a while.) 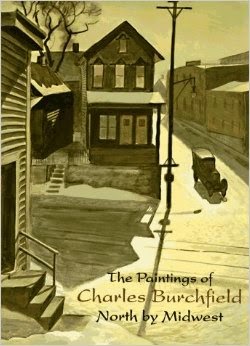 Some days I do the daily crossword at Yahoo Games (click here). And find it as relaxing and stress reducing as meditation is supposed to be. Or I get lost in a couple of books about the American watercolorist Charles Burchfield (1893-1967), whose paintings capture the Midwest as a kind of emotional terrain that is as deeply felt as it is observed. His was a life lived fully and richly. At least it seems so as I read of how he evolved as an artist, the ordinary world transformed by his eye, his heart, and his hand into a "cosmic funhouse" of his own.

And so life goes on.

I’m closing again with a jazz video suggested by a reader. This one is from the Joshua Redman Quartet, "Blues On Sunday," a real roof raiser, recorded in concert in Munich, 1994.

Any other readers with jazz favorites of their own, links to them are welcome.