Here’s another one of many screen versions of the story of Billy the Kid. Based on a teleplay by Gore Vidal, this first film by director Arthur Penn may or may not be faithful to Vidal. It surely is not faithful to history. 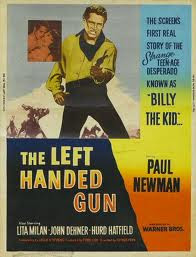 This time, thirty-three-year-old Paul Newman plays the nineteen-year-old Billy. Like The True Story of Jesse James (1957), the film gives us a painfully confused young outlaw as a protagonist. Two other films from the same period come to mind, Rebel Without a Cause (1955) and The Young Stranger (1957), about alienated young males.
Must have been something about the 1950s. I felt a twinge of it even as a farm boy in Nebraska.
The concept of the film had some promise. What if you forgot about all the previous Hollywood versions of Billy and portrayed him instead as he probably was – an adolescent boy who never had a real father, a lost young soul who was also quick with a gun.
Then let the murder of his father-like employer, John Tunstall, be the motivation to kill the four men who ambushed him. Cast him as an avenging angel, serving his own sense of justice. Alas, taking the law into his own hands gets him deeper and deeper into trouble. First he is badly burned in the torching of a house where he has taken refuge. Then his old friend Pat Garrett goes after him.
The result is a kind of melodrama that’s supposed to feel like a tragedy. Which is OK, but a half century later, Paul Newman’s portrayal of this beautiful loser seems more than a little heavy-handed. The broadness of Billy’s goofy playfulness with his buddies and the scenes of adolescent angst seem styled for the stage. But they feel overdone for the camera.
The film offers an interesting example of how the past gets mythologized. The messiness of historical fact is simplified and understood in terms of the present day. So we get Billy as an alienated youth of the 1950s. While the real Billy might be flattered to be portrayed by the likes of Paul Newman, he’d surely not recognize most of his own story. 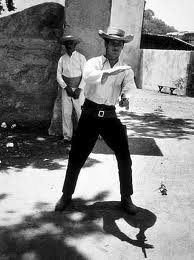 History vs. Hollywood. The film portrays the Lincoln County War as a conflict between rival cattle barons – a range war. This is a Hollywood shortcut that sidesteps the complexity of the competing business interests that fought over economic control of the region.
The actual “war” in the streets of Lincoln, New Mexico, was a day-long affair and involved Army troops from a nearby fort. The McSween house, where Billy and the other men were under attack, was a large adobe structure that burned slowly. Billy escaped unscathed under cover of darkness – not badly burned in a sudden conflagration and believed dead, as the film tells it.
The Sheriff Brady killed by Billy was not one of the men who ambushed Tunstall. Billy had killed him in younger days after a heated dispute in a saloon. So when he signed on with Tunstall, he had already killed a law officer – not a street drunk who once insulted his mother, as the film suggests.
According to at least one version of history, New Mexico Governor Lew Wallace offered Billy amnesty for that crime if he gave evidence for the prosecution in a trial. But Billy got into a whole lot more trouble, and that amnesty was never granted. 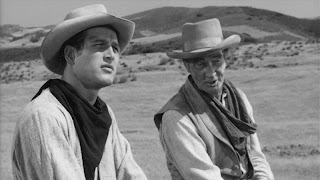 Billy was in fact a cattle thief, a hanging offense that the film makes no mention of. The chief reason Garrett was hired as sheriff was to stop him and others who were cutting into the profits of the real cattle barons, such as John Chisum, who gets no mention in the film either.
Like Sam Peckinpah’s Pat Garrett and Billy the Kid (1973), Penn’s film casts Garrett and Billy as old friends. Part of the drama in both films is Garrett’s decision to betray that friendship.
This is another modern idea imposed on the Old West, which as I understand it operated by another code of ethics. Friendship between men trumped cooperation with law enforcement. A man stuck by his friend no matter what. 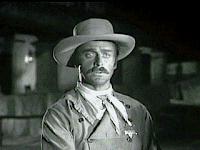 The film has Garrett turn against him finally because Billy shoots the last of the four men he’s been after at Garrett’s wedding. High drama, yes, aiming for sighs of dismay from the audience. But nothing resembling this really happened. The Pat Garrett of history took the sheriff’s job and went after Billy for the simple reason that he needed the money (he was already married and had a family to support).
Then there’s this business about Billy’s being left handed. He wasn’t. The error seems to have its origins in a reversed print of Billy’s famous photo, in which his gun appears on what would be his left hip. Search the Internet today, and you’ll still find both versions of the photo. Proving once again that you can’t believe everything you find on the Internet.
Neither was Billy an orphan, as the film asserts. His mother and a brother were living at the time in West Texas. 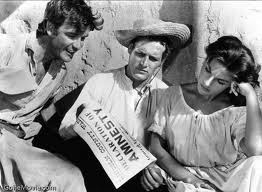 Getting it right. Something the film tries to show is Billy’s alleged playfulness. He and his buddies often behave like fourteen-year-olds, goofing, joking, laughing. History tells us he was also a favorite of the ladies, and the film grants him a Mexican girlfriend. This is a romantic pairing as Hollywood portrayed them in 1958. She demures and he persists. Then as she begins to relent, the scene dissolves into a display of fireworks.
A couple things the film does get more or less right are Billy’s escape from the Lincoln County jail and his eventual shooting by Garrett. Billy’s escape – killing two deputies – was already high drama. You couldn’t do much to improve it.
Garrett’s actual shooting of Billy, however, was fairly anticlimactic. It happened suddenly and in a darkened room at night. Billy was carrying a revolver and a knife, and he probably died without knowing who or what hit him.
The film gets the night part right, but that’s about all. Garrett holds Billy at gunpoint, trying to persuade him to surrender. Billy seems to reach for his gun, and Garrett shoots him before discovering that Billy is unarmed. Death by law officer. That’s another one that makes sense to a modern audience, but would be hard to fathom on the frontier. 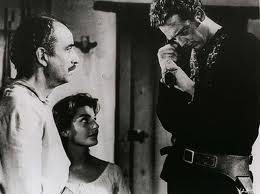 Wrapping up. I could be a crank about this film, and say it’s strictly for Paul Newman fans. But that would overlook an interesting aspect of it. It’s both a western and an anti-western. The matter of outlaws, gunplay, and revenge are among the essential elements of the genre. What’s contrary to the genre is the reach for psychological depth.
Insttead of an outlaw hero who’s a rebel against a corrupt power structure, we get a confused, lonely, deprived youth. He ends up on the wrong side of the law by chance more than choice. It’s a “liberal” understanding of juvenile delinquency.
Not that this never happens, but the western doesn’t hold up well under the influence of  this kind of thinking. It goes soft in the middle, as this film does. It asks us to feel sorry for Billy. Not because he was brave, colorful, and a maverick, but because he didn’t get the breaks of a normal kid. An outcast rather than an outlaw. Doesn’t quite work.
Picture credits:
1) Movie poster, forum.westernmovies.fr
2) Billy firing gun, imdb.com
3) Billy and Tunstall, dvdbeaver.com
4) John Dehner as Garrett, aveleyman.com
5) Billy with amnesty poster, gonemovies.com
6) Billy in dark shirt, xanga.com
Coming up: Review of Andy Adams’ The Outlet
Posted by Ron Scheer at 7:12 AM