Rhodes' novel first appeared as a five-part serial called "The Little Eohippus" in the November and December 1912 issues of Saturday Evening Post.  When it was published in book form the following year, it went by the title Bransford in Arcadia, or The Little Eohippus. Arcadia is the name of a town where some of the story takes place. The eohippus is the name given to the ancestor of the horse. It was a small mammal with toes instead of hooves. 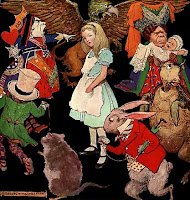 I’ve got a bunch more post-its sticking out of my copy of this novel for details that want to be included here, but I’ll end with this one. I think it sums up Rhodes perfectly. As Jeff is crossing the Rio Grande, he takes a book from his pocket and puts it under his hat, to keep it dry. The book is Alice in Wonderland.
Further reading:
Description of annual visit to site of Rhodes ranch and grave
Photo of Rhodes ranch site in Rhodes Canyon
W. H. Hutchinson, “The West of Eugene Manlove Rhodes,” Arizona and the West, 9,.3 (1967), 211-218.


Image credits: All images from wikimedia.org
Coming up: Rex Beach and more early western movies
Posted by Ron Scheer at 6:28 AM