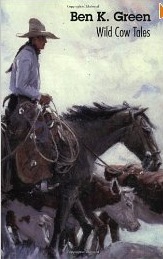 Today I'm beginning a series of what I'm calling cowboy memoirs. These are books written by or about cowboys describing their lives and their work. This is one of several by Texas writer Ben K. Green (1912-1974), who in the later years of his life wrote of his experiences in much younger days. Wild Cow Tales was published in 1967.

Wild cows, as he explains, are just plain ornery, uncooperative cattle that resist all efforts to be rounded up. As a young Texas cowboy in the 1920s and 30s, Green made a living going after these hard-to-catch cattle, and this book is a collection of accounts of his successes (if he ever missed any, he doesn't mention it).

Usually he works alone, on horseback, gathering up cows a few at a time and driving them to the nearest train station where they can be shipped to market. Typically he has worked a deal with the owner, buying them "range delivery," and spending sometimes many weeks to outsmart the critters, often one by one, to get them roped, corralled, or whatever it takes.


A young, tough, wild cowboy, as he often refers to himself, he has more than his share of hot, sweaty work, getting bunged up, frustrated, and frequently outmaneuvered. On one job, he's also shunned by a whole community of folk who regard him with disdain as he works to gather up a herd of cows for a bank collecting a bad debt. Each account is different, presenting a very different situation, and Green takes the reader along as he mulls over the problem, tries this and then that, eventually finding a solution.

I thoroughly enjoyed this book. It's a departure from other books about cowboying, and it gets very much into cowboy psychology and the wealth of knowledge acquired in dealing daily with cattle. Green writes in a conversational style, with dry humor and a leisurely way of setting scenes and describing action, meanwhile building a kind of suspense as he figures out each time how to outsmart his "wild cows."

Thanks to the University of Nebraska Press for reprinting this and many other classics of western literature. Western illustrator Lorence Bjorklund provides many fine drawings, and with the cover design from a painting by W.H.D. Koerner they nicely capture the spirit of this book.