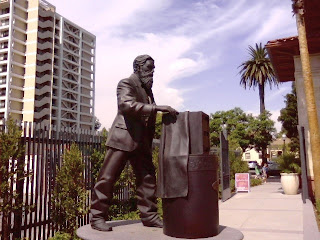 There’s a huge new film school complex on the USC campus built to look like the old Hollywood studios of the 1920s. Tucked against the back fence of a little square of lawn behind one of the buildings, you’ll find this statue of the man who styled himself as Eadweard Muybridge (1830-1904). Here he is with his invention, the zoopraxiscope, an early motion picture projector.

Muybridge (born plain old Edward Muggeridge) was a British-born entrepreneur. He was the kind of man California was and still is made for. His work, currently on exhibition at the Tate Britain in London, was a mash-up of science, art, and entertainment. Robber baron and railroad magnate Leland Stanford was for a time a patron. With a bank of cameras and trip wires, he proved for Stanford that a galloping horse does for a moment lift all four feet from the ground.
It was a helluva life, with much travel, sometimes as a photographer in far-flung places for the U.S. government. He was a developer of stereoscopic photography and dragged a behemoth camera around Yosemite to anticipate the work of people like Ansel Adams. And he was famously acquitted of murdering the drama-critic lover of his young wife. Meanwhile, the multi-image “movement studies” of mostly nude men and women in his later years lean suggestively away from pure scientific inquiry.
You can catch the exhibition in London until January 16, 2011. Here’s an informative account of the man’s life.
Coming up: another 3-minute western