Today I’m taking a quick look back at Eugene Manlove Rhodes. I have a copy of a story collection, The Rhodes Reader, assembled by W. H. Hutchinson in 1957. This is truly a “forgotten book” available only from used book sellers, even though reprinted a couple of times since then. 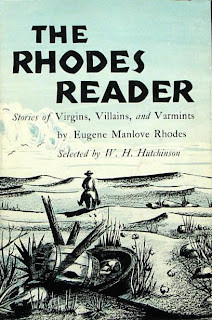