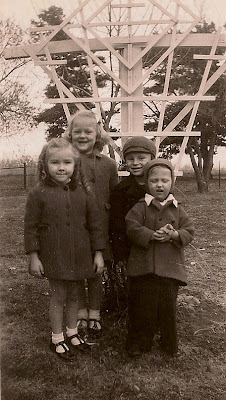 Today I’m remembering Jan. She was my first cousin, in both senses of the word. My mother and her father were brother and sister, and when I arrived on the planet in 1941, Jan was already here and waiting. Always a year behind, I never really caught up with her.

We grew up in Nebraska, and a big difference between us was that I lived on a farm and she lived in town. We went to different schools, so my early memories of her are mostly of family gatherings three or four times a year. Then we’d get to be kids together for a few hours.
That's a photo of us taken on a snowless Christmas Day at our grandparents' farm in 1946. Janice, as she was called then, is the tallest, in the back, and I'm next to her. Our cousin Marlene and Jan's brother Larry are in front. Jan seems to be the only one really enjoying this. That was Jan.
In later years, she loved to tease me about one of those times in particular. We were about the age we are in the picture, and she decided it would be fun if the two of us got married. Not when we grew up, but right then and there. We’d have a little do-it-yourself ceremony, and we’d be hitched for life. It was probably the only time she ever really scared me. I had enough of let’s-pretend and ran off to join the adults, probably in tears.
I remember her folks’ house on Pioneer Boulevard in Grand Island – the first one, where one of the neighborhood dogs left a permanent tooth mark in one of my arms. And what I really remember is that it was a house full of games and toys. I was envious that her parents – my aunt and uncle – believed so generously that children should have plenty of fun.
Life there seemed idyllic and relaxed. There were no farm chores to be done morning and evening, and there were other kids to play with. The streets were paved so you could ride a bicycle just about anywhere. Rules were enforced with an easy hand. It seemed to be a perfect setting for developing a sunny disposition, and Jan always had one.
Our lives grew apart as Jan married and came to California. Over the many years, we have seen each other a few times, but briefly, whenever I’ve been to the Bay Area on business trips or a rare vacation. I knew the house in Mountain View and have memories of it when her two children were toddlers, then years later when they were long gone and living lives of their own.
Then there was the house in Sunnyvale. I remember it as a library of books filling every available space, two and three deep on book shelves and stacked on the stairs. She had owned a bookstore once. As another book lover, I can say that being surrounded by all those volumes was like being wrapped in a security blanket.
Jan was a great birthday rememberer, and I could expect a call from her every year in October. Once I remember a long conversation of ours on a cell phone as I stood outside the museum at Manzanar. I missed that phone call this year, and I’ll go on missing them. She was the only member of our rather reserved German Lutheran family who felt comfortable saying, “I love you.”
The last time we spoke, she said again that we needed to spend more time together. We had allowed the contingencies of our lives to keep us from what the heart needs most – to be in touch with those we’ve been close to. I would like to have had one more time together, although with Jan – being Jan – one more time would never have been enough.
Posted by Ron Scheer at 4:25 AM