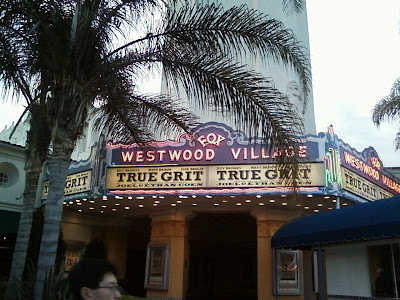 Well, I’ve seen it, and like everybody says, it’s good. I saw True Grit at this theater in Westwood, a landmark movie house near the UCLA campus. Built in 1931 by Fox and used for movie premieres, it seats a whopping 1,400. Atop the entrance is a 170-foot white Spanish Revival tower (which did not fit in the pic, but you can see it here).

It would have been fun to see the movie with a full house, but I was there at 2:30 on a Thursday afternoon, two weeks after the opening. I was able to wear my Stetson without obstructing anyone’s view of the screen. (Not the one in my profile pic. I have a buffalo felt hat that looks a lot like the one Matt Damon wears in the movie.)
As for the movie, I’d read so much about it, yet I was still surprised by much of the way it was made. It is a movie that is set in the frontier West instead of being a conventional cowboy western.
It reminded me of Lonesome Dove, as it visits some of the same geographical territory and is also constructed as a “road movie” – without the road, of course. The same town, Fort Smith, figures in both stories (though the Coen brothers' looks a lot less like a movie set). There’s a subplot in Lonesome Dove, like the main plot of True Grit, with the sheriff from Fort Smith in pursuit of a killer that takes him and both a boy and a girl across Indian Territory.
There’s the same kind of anxious, melancholy mood in both films in its portrayal of people in a lawless environment, where everyone carries a gun. Setting True Grit in the winter adds to that feeling of being at the mercy of forces more than ready to separate soul from body.
I haven’t read the reviews, so maybe all of this has been said, but as a reader of early westerns, I appreciate the way the film connects with the original spirit of the genre. Jeff Bridges puts in a performance at least ten times as interesting as the one that got him the Oscar last year. And Matt Damon was not the worst choice to play an uptight Texas Ranger.
I was expecting this blown-away performance from Hailee Steinfeld. And I mostly was, but in another way. What’s amazing is how she holds up as a central character through the whole film. She also harks back to earlier western heroines (and maybe this is thanks to Charles Portis, who created the character in 1968). Early westerns frequently feature a “girl of the West” who has all the grit of Mattie. I will read the novel and then get back to this.
Anyway, I’m not surprised now that the movie has done well at the box office, having built an audience, apparently, by word of mouth after the opening weekend. It’s the kind of western that appealed to multi-generational audiences before they turned R-rated.
Coming up: Old West glossary, no. 6
Posted by Ron Scheer at 8:33 AM