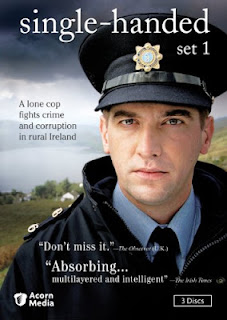 Made for Irish television by state broadcaster RTE, this cop drama is set in the far west of Ireland in Connemara, along the Atlantic Coast. It’s one of those places where most residents grew up there and never left home, and everybody knows everybody else’s business. Garda Sgt. Jack Driscoll (Owen McDonnell) has returned from Dublin to the seaside community of his youth, filling the shoes of his retired father who once held the same job.

Being Ireland, one gathers, there is plenty of history that’s been covered up in decades of secrecy. Wrongdoers, residents, and police have colluded in practicing a kind of law enforcement that’s somewhat outside the parameters of the law itself. Determined to do his job by the book, Driscoll uncovers a whole lot more dirty work than he bargained for when he agreed to take the job.

The first episode of Season 1 starts with a familiar set-up for anyone who has watched a lot of British crime drama. A body is discovered in the opening scenes and we get to know a series of local folks as Driscoll tries to sort out what happened. Though the death looks accidental, you expect him to eventually suss out what looks suspicious and finger a killer.

Something like that happens, but not until after his investigation discloses multiple layers of subterfuge. The story grows darker and darker as it takes one unexpected turn after another, eventually leading to a miasma of implications that involve Driscoll’s own family.

Like many a modern series about crime detection, this one has a conflicted hero at the center. Jack Driscoll has a little problem with anger management and he apparently made trouble for himself while on the force in Dublin. For one thing, he seems to have been over-familiar with a colleague’s wife.

Wearing a uniform out here on the edge of nowhere, he is often portrayed as a lonely man, pitted against a community used to another kind of law officer. He rather easily welcomes into his isolation the affections of women who find themselves temporarily within his jurisdiction. He’s a gentleman about it, but a young woman in each of the first two seasons finds her way into his bed.

We like him because he tries so hard to do the right thing, to be honorable and above the corruption that tends to prevail everywhere around him. The one other law officer at his station, Sgt. Finbarr (David Herlihy) is unreliable and not accustomed to honoring a high standard of police work. A retired member of the local force (Sean McGinley) runs a tavern and is generally up to no good. Like a sphinx, Driscoll’s mother (Ruth McCabe) seems always sweet and pleasant enough, but long ago learned to pretend to know nothing and to reveal nothing of what she’s thinking.

There is a melancholy tone to the series that often underscores the sorrows that crimes uncover. In Season 2, Stephen Rea plays a long lost uncle who grew up in a brutal boarding school for boys. He is the adult survivor of indescribable abuse, and in Rea’s performance, his story breaks your heart. Meanwhile, Driscoll’s brightly colored police van travels the narrow, winding roads of Connemara. The brooding hills are as beautiful and forbidding as the Brontë’s moors.

Here are a couple scenes from Season 2, episode 3, with Owen McDonnell and Simone Lahbib.

Seasons 1 and 2 of Single-Handed are available in the U.S. at netflix. Two additional seasons were produced in 2009 and 2010. For more Overlooked Movies and TV, click on over to Todd Mason’s blog.
Tweet