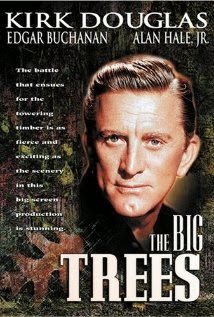 Kirk Douglas once said, “I've made a career of playing sons of bitches.” The role he plays in this western is one of them.

Plot. Here he plays a lumberman in 1900 who takes advantage of a new federal law that permits him to legally jump timber claims in California. There he has his eye on the old growth giant redwoods. And nothing stands in his way but a religious community of Quakers, who regard themselves as stewards and protectors of the trees.

Spokesperson for the community is one of the faithful, a woman (Eve Miller) who attempts to persuade Douglas to harvest as much of the forest as he wants but to save the beloved sequoias. He is in no mood to make a deal until he has to fend off the schemes of determined competitors, and only then does he reluctantly come around.

But before long, his logs are trapped behind an old dam, which prevents them from getting downstream to the shore where they can be delivered to the sawmills. Douglas circumvents the dam by sending the logs around it by rail. But the villains aren’t easily outwitted. The exciting climax involves a runaway section of train loaded with cut timber and headed for a dynamited trestle.

Romance. To win the support of the Quakers, Douglas decides to honor their tree-hugging mission, and that seems to be good enough for the straitlaced Miller. When her father is killed in his cabin by a falling tree, she is persuaded that Douglas’ show of remorse is genuine. True to convention, the two come to an accord that points toward a meeting of hearts, though not a very convincing one.

Another woman (Patrice Wymon), who has been Douglas’ long-time partner in crime, plays along with his double-dealing one last time before finally cashing in her chips and heading for the exit.

Wrapping up. Here is the opening of the film, with Douglas at his smarmy best dealing with disgruntled loggers and unhappy investors.

The film was shot in Technicolor in northern California, and its exploiter vs. early environmentalist plot line holds enough interest for the bulk of the story. However, before it’s all over, there are plot complications caused by shifting alliances among competing lumbermen that get hard to follow. In the last reel, good guys and bad guys have switched places, and one of the key supporting characters (Edgar Buchanan) gets fatally caught between them.

The final action sequences are well worth the wait for them. At one point, Miller is locked inside a caboose attached to that runaway section of train. Meanwhile, Douglas has leapt aboard and is scrambling from one car to the next in an attempt to rescue her. When the logs tumble off a high trestle, the caboose comes to a stop just inches before taking the same tumble. Even in standard ratio, it would have to be spectacular on the big screen.

Director Felix Feist was also responsible for The Man Behind the Gun (1953) with Randolph Scott. Screenwriter John Twist provided scripts for several westerns in the early 1950s, including that one. Other westerns by co-writer James R. Webb include Vera Cruz (1954), The Big Country (1958), and Cheyenne Autumn (1964).

The Big Trees is currently available online at YouTube and amazon instant video and on DVD at amazon and Barnes&Noble. For more Overlooked movies and TV, click over to Todd Mason’s blog, Sweet Freedom.
Tweet

Further viewing:
BITS review of The Man Behind the Gun (1953)

Coming up: Alethea Williams, Walls For the Wind