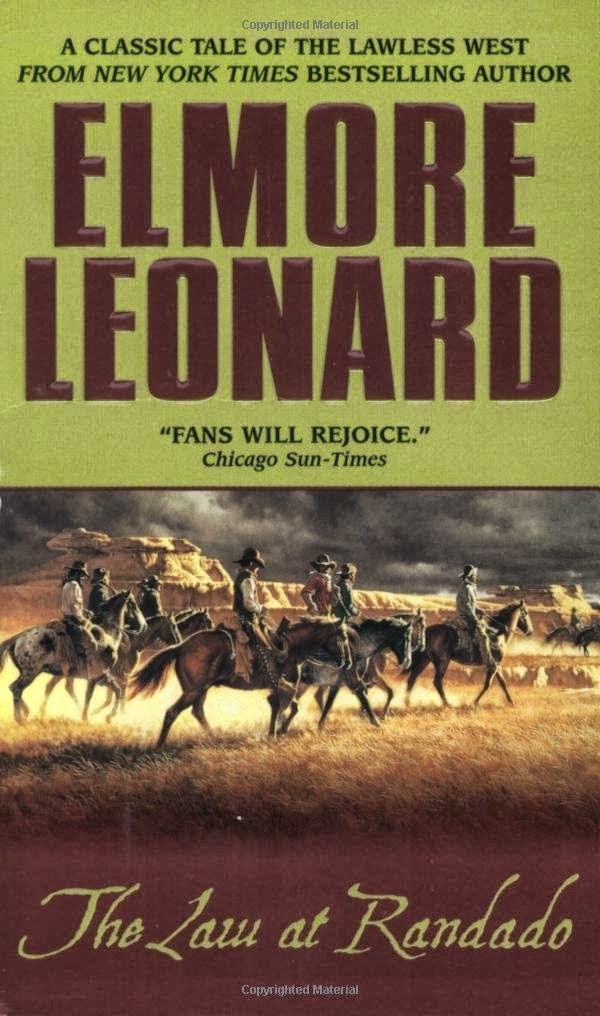 Elmore Leonard’s early western novels show a gifted short story writer learning how to master the longer narrative form. The Bounty Hunters (1953) is a sometimes awkward attempt to extend and enlarge characters and situations that would make sharply conceived material for short stories but thin out and lose focus over the length of a novel.

The Law at Randado shows him still learning, but he’s turning what he knows of the short story into what holds together well for its 250 pages and more than maintains our interest. The novel still reads like a series of short stories, but each flows smoothly into the next, with continuing characters, and a central thread linking two of them, a sheriff and a young deputy he has hired, Kirby Frye.

Plot. The premise of the plot concerns Frye’s having to deal with a cattleman, Sundeen, who prefers a vigilance committee to keep order in town. Matters come to a head when the self-elected vigilantes hang two Mexicans awaiting trial for rustling, and the young deputy is beaten up as he attempts to assert his authority as “the law at Randado.”

The main action of the novel involves an extended manhunt, as sheriff, deputy and a posse ride off in pursuit of the vigilantes to serve warrants and deal with any resistance to arrest, which they get more than a fair share of. The chief instigator, Sundeen, is chased to an abandoned mine camp (a scene found again in the novel Hombre) and from there all the way back to town, where he and Frye have a final showdown in the saloon.

The other thread linking the episodes of the novel concerns the sheriff and his deputy, as the younger man proves this worth on the job, despite the odds against him, and the sheriff’s initial judgment of his character and capabilities is confirmed.

The suspenseful manhunt and the restoring of lawful authority provide the central conflict that makes the book a novel, while the relationship between Frye and his boss, the sheriff, adds resonance one associates with the short story, where nuance and shifts of perspective take the place of big movements of plot.

Wrapping up. So this western works as a blending of forms, drawing its overall plot structure from what we expect to find in a novel, while drawing on the short story form for richness of characterization and emotional depth in the situations that Leonard’s characters find themselves in. His gift for realistic and believable dialogue as found in his short stories (I’m thinking of “3:10 to Yuma” as an example) also serves this end.

I thoroughly enjoyed The Law at Randado. Told from the point of view of a dozen or more characters, the novel creates a social context for its story that makes Randado more than just a generic frontier setting. Secondary characters are developed as people who live here and have complicated relationships to each other.

We learn some of their stories through digressions and flashbacks. They range from an Apache scout and tracker never sure of his understanding of white culture (a theme returned to and developed more fully in the later novel, Hombre) to a mail order wife unfaithful to her husband. You find yourself wishing that Leonard had given more of himself to the western instead of switching to crime fiction.

The novel was adapted to a poorly received film in 1990, Border Shootout, with an aging Glenn Ford as the sheriff and unknowns in other roles. The Law at Randado is currently available in print and ebook formats at amazon, Barnes&Noble, and AbeBooks. For more of Friday's Forgotten Books, click on over to Patti Abbott's blog.
Tweet