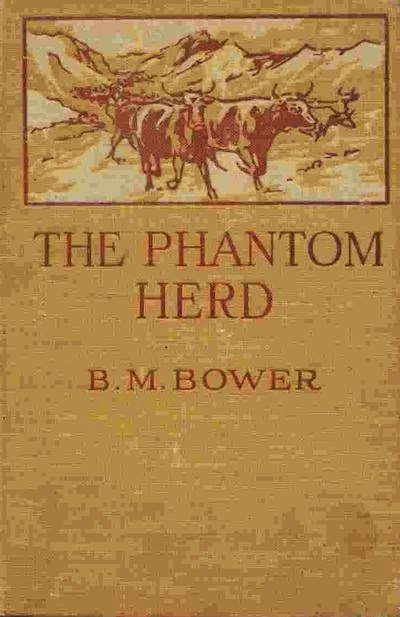 Novels about the early days of western movies are few and far between. B. M. Bower more than makes up for that in this story of a Hollywood filmmaker, much like William S. Hart (see this week’s BITS review of his Wagon Tracks).

In Bower’s novel, director Luck Lindsay wants to make a film about the real West of the open range days, not the shoot-em-up “bunk” currently being released to the public. As Luck explains:

For film purposes, the West consists of one part beautiful maiden in distress, three parts bandit, and two parts hero. Mix these to taste with plenty of swift action and gun-smoke, and serve with bandits all dead or handcuffed and beautiful maiden and hero in lover’s embrace on top. That’s your West, boys – And how well I know it!

Scenes, he complains, are shot on cheaply built sets and in scenery no grander than nearby Griffith Park.

Plot. Luck has a script for a feature-length film about real cowboys herding cattle and invites the cowhands from the Flying U ranch in Montana to be his cast, but the studio turns down his script and puts them all to work on another western instead, which they trash by making a farce of it. Thoroughly enjoyed by the usually jaded viewers in the studio screening room, there’s little doubt it will be a moneymaker with the public.


But the screenwriter is not amused. He has a contract that requires honoring the spirit and intent of his work or he'll sue (different days in Hollywood, for sure!), but Luck refuses to reshoot it. Offered a job to replace a director at another studio, he turns it down because the project already has a supply of cowboys on the payroll and doesn’t need more from the Flying U.

Learning that he has given up a plum opportunity because of them, the Flying U boys determine to help Luck make his film on his own. Chipping in their savings, they help him buy a camera, film stock, radium flares, light diffusers, and chemicals for developing and making prints. Then it’s off to New Mexico to shoot the film on location.

The project, however, is soon fraught with technical difficulties, and we learn much about the complex process of movie production. The first day of shooting in a dramatic snowstorm is spoiled by their makeshift developing equipment. Inexperienced as a cameraman, Luck then discovers that his next batch of footage has been overexposed. So he hires a young movie projectionist he meets in Albuquerque, who knows about correct cranking speeds but little else.

Meanwhile, Luck realizes that he will have to do without a female lead in his movie. Rosemary, the wife of one of the Flying U cowboys is a welcome addition to the crew, but she is terrified in front of the camera and is relieved to be no more than the company’s cook.

They are then joined by a Sioux Indian from Pine Ridge, Annie Many Ponies, who knows and admires Luck from a time when her father, the chief, adopted him into the tribe. She is lovely, rides “like a whirlwind,” does not know the meaning of fear, and is a natural in front of the camera, but as an Indian, she is the wrong color for a western film’s leading lady, and there is no place in the budget for a white one.

So Luck rewrites the script, and the story becomes one about a rustler’s reform—not a love story. And he remains content that the finished film will be about “the bigness of the West when the West was young.”

There are more obstacles, not the least of which is waiting months for a big snowstorm, to reshoot a key scene. But all finally ends happily as Luck is able to show a print of his film, The Phantom Herd, at a convention of Texas cattlemen, who give it their enthusiastic endorsement. Back in Hollywood, the success of the film has proven his worth to a big studio chief, who offers him a lucrative contract.

Wrapping up. Bower, who settled in Los Angeles after leaving Montana, saw 20 of her novels and stories made into film, offering her an insider’s knowledge of the industry. The Phantom Herd reveals much about the day-to-day business of making early silent westerns as well as many technical aspects.

The novel is currently available online at google books and Internet Archive; it's also in print at AbeBooks. For more of Friday’s Forgotten Books, click on over to Patti Abbott’s blog.
Tweet