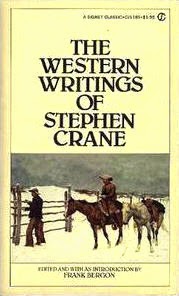 It’s been too long since I read The Red Badge of Courage—if I can say that I really read it the first time. (Literature gets wasted on the young.) I remember the irony of the novel’s premise, but I have no memory of Stephen Crane’s mastery of style, tone, and narrative flow.

This collection of his western writings, compiled in 1979 for the New American Library, awakened in me both an appreciation for him as a writer and a deep sorrow that his creative life was cut so short, by consumption, at the age of only 28.

The handful of stories (nine, depending on how you count them) are wonderfully told, bright with wry wit and a sensibility that finds dark humor in the lives of ordinary people wading without knowing it into big trouble.

Themes. “The Blue Hotel” is the finest example of that, as four men gather by a stove to play cards in the parlor of a hotel during a fierce Nebraska blizzard. One of them, a Swede, behaves strangely. New to what he believes is the Wild West, he fully expects to be killed by one of the card players.

Emboldened by his fear he accuses the hotel owner’s son of cheating. After beating the boy soundly in a wind and snow swept fistfight outdoors, the Swede leaves the hotel and finds death waiting for him instead at the hands of a gambler at a nearby saloon.


Crane describes a world where a moral code does little to inform the lives of men. They simply stumble in and out of circumstances that leave them stupidly vulnerable to their own faults and weaknesses. One of the card payers, an Easterner, wants to share the blame for what happened. “Every sin is the result of a collaboration,” he says. Any one of them could have prevented the man's death. But a more Western opinion is voiced by one of the other players, a cowboy—“Well, I didn't do anythin'. Did I?” The Swede brought on his own demise.

Sometimes a man is saved by his own ignorance or plain dumb luck as in “The Bride Comes to Yellow Sky,” where a newly married town marshal walks headlong into a drunk with six-guns whose rampages regularly terrorize the residents. One look at the new bride and the troublemaker loses all his nerve—game over.

There’s a similar turn of events in “One Dash–Horses,” as a foolhardy American, adventuring in Mexico, crosses paths with a gang of desperados, who make no secret of meaning to do him harm. A mad chase on horseback almost leaves him their victim, until pursued and pursuers happen upon a regiment of rurales, who send the bandits into a hasty retreat.

Daring, in fact, often leads to naught. A fearless American sheepherder in “A Man and Some Others” takes on several Mexicans who try to drive him from their grazing range, but after a night of bravely defending himself he fails to survive. Neither does the bullying ruffian in “A Texas Legend,” who has made at least one too many enemies.

Crane does not indulge in much sentiment. Twain and Garland exhibit their own kinds of empathy for the men and women they find on the frontier. But Crane strikes a stoic distance. In “A Man and Some Others,” he calls forth an image of human solitude as he describes the flames of a campfire with these words: “an ancient melody which surely bears a message of the inconsequence of individual tragedy–a message that is in the boom of the sea, the sliver of the wind through the grassblades, the silken clash of hemlock boughs.”

Humor. There’s grim, hard-edged humor in “The Blue Hotel” and something more like light amusement in “The Bride Comes to Yellow Sky.” But in “Twelve O’Clock,” Crane relishes sheer comic nonsense in his portrayal of cowboys in a farcical disagreement over a hotel cuckoo clock, the likes of which they’ve never seen before. In the hour that elapses until the clock strikes 12, they work themselves into a dispute that escalates into gunfire at the cost of the hotel owner Placer’s life. This is how Crane tells it:

Big Watson laughed, and, speeding up his six-shooter like a flash of blue light, he shot Placer through the throat – shot the man as he stood behind his absurd pink counter with his two aimed revolvers in his incompetent hands. With a yell of rage and despair Jake smote Watson on the pate with his heavy weapon, and knocked him sprawling and bloody. Somewhere a woman shrieked like windy, midnight death. Placer fell behind the counter, and down upon him came his ledger and his inkstand, so that one could not have told blood from ink.

Crane relishes the darkly comic absurdity of each detail. Once again stupidity is its own reward as a man foolishly brings on his own demise.

Wrapping up. Stephen Crane (1871-1900) should have had a chance to leave us a dozen novels. He would have been a national treasure. Instead he fell victim like Doc Holliday and so many others to the white plague, which 100 years ago was taking the life of one of every 10 Americans.

The Western Writings of Stephen Crane is currently available at AbeBooks. For more of Friday’s Forgotten Books, click on over to Patti Abbott’s blog.
Tweet