Today, as promised, is my list of memorable films made in (what are to me) foreign languages. Again, it's a mix of old and new. I just happened to see them for the first time this year. They're in no particular order.

The Secret in Their Eyes. Suspenseful political crime drama from Argentina. Ricardo Darín plays a former cop still trying to solve a rape-murder thirties years in the past. Got the Oscar last year for best foreign film.


Romantico. This documentary puts a human face (and heart and soul) on the illegals that “show me your papers” laws are intended to identify and send back to Mexico. For anyone willing to set aside their fears or prejudices, the film provides an opportunity to experience U.S. immigration laws from the other side.
Departures. Moving and insightful Japanese film about an unemployed cellist who becomes a nakanshi, one who performs the ritual preparation of the dead for burial. Won an Oscar, in a previous year.
Seraphine. Beautifully made film with a compelling performance by Yolande Moreau as early 20th-century French painter Seraphine Louis. A housekeeper and laundrywoman, paid little for her services and regarded with disdain by her social betters, she creates inspired paintings that are both primitive and hallucinatory. 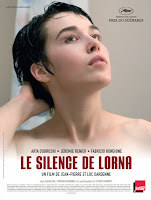 Lorna’s Silence. Best described as a docu-noir, this Belgian film by Jean-Pierre and Luc Dardennes explores a criminal underworld that arranges marriages for the purpose of gaining citizenship. A well-meaning woman gets mixed up with some very scary types.

Close-Up. This docudrama by Iranian "new wave" director Abbas Kiarostami was shot in 40 days, using courtroom footage and reenactments with people playing themselves. It explores the nature of identity with the story of an ordinary man who gets involved with a family by letting them believe he is someone famous.


The Death of Mr. Lazarescu. This 2+ hour docudrama follows a single night in the life of a dying man in Bucharest as he attempts and finally fails to get help from a problem-ridden health care system. A fine, heart-felt, and honest film.

Ajami. Powerful film about a neighborhood in Jaffa where Jewish, Christian, and Muslim Israelis live uncertainly together. A drive-by shooting sets in motion a harrowing series of events with a tragic ending. Excellent performances by nonprofessional actors.
Welcome. Poignant and thoughtful film from France, set in Calais, where illegals gather in the hope of being smuggled into the UK. A swimming instructor befriends a 17-year-old Kurd, who wants to swim the Channel to rescue his girlfriend from an arranged marriage.
A Prophet. Gripping Oscar nominee from France, this 2.5 hour film follows the career of a young Arab man thrown into prison and adapting to a violent prison culture. Excellent performances and a story with many breathtaking moments.
Next time: Top-10 books
Posted by Ron Scheer at 7:09 AM