Over the past couple of years, I’ve been slowly catching up on classic film-noir movies I’ve mostly never seen. I was around when they were new in the 1940s and 50s, but they weren’t meant for kids. I remember seeing Sunset Boulevard at the age of nine with my movie-fan parents and being thoroughly disturbed by it. I still am.

Nowadays, I enjoy these films for the way they offer the audience a vicarious walk on the wild side. They are Hollywood’s idea of an amoral universe (to the extent permitted by the Production Code, of course). I also enjoy the black-and-white visual style, where every Venetian blind casts its shadow. Here are 10 of the best ones I saw this year. 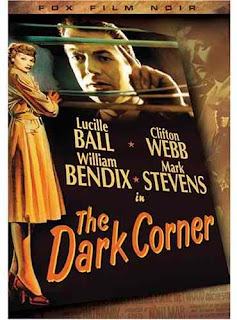 The Dark Corner. Lucille Ball headlined this 1946 Henry Hathaway film. She plays the smart secretary of a private eye (Mark Stevens) with a prison record, set up not once but twice for a murder he didn't commit. Set in New York, with documentary footage, the film also stars William Bendix and Clifton Webb.
The Killing. Sterling Hayden stars in this 1956 Stanley Kubrick film about a career crook with a complex plan to rob a racetrack. Jim Thompson co-wrote the screenplay and noir is pushed to the limits with inventive cinematography, location shooting, and a pounding soundtrack.
The Killers. This 1946 adaptation of Hemingway's 1927 short story of the same name has an insurance investigator (Edmund O'Brien) solving the murder of a former prizefighter (Burt Lancaster) who has run afoul of a "double-crossing dame" (Ava Gardner). Dark, cynical vision provided by German director Robert Siodmak. 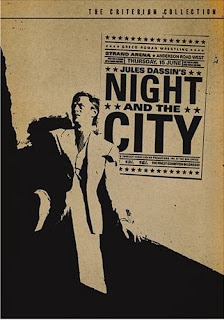 Night and the City. Great cinematography in this 1950 classic starring Richard Widmark as a con man on the run during an action-packed night in London. Gene Tierney co-stars, with an excellent British supporting cast. Directed by Jules Dassin, himself on the run from the Hollywood blacklist. Exciting and grim.
Crossfire. A murder mystery directed by Edward Dmytryc, the entire story taking place in one night. Pipe-smoking Robert Young as a police detective sets out to solve the murder of a Jewish man after he befriends some soldiers in a bar. Nominated for an Oscar in 1947 for its frank treatment of anti-Semitism. Robert Mitchum, Robert Ryan, and Gloria Graham also star.
Double bill: They Live by Night. Farley Granger and Cathy O'Donnell team up in this 1948 film to play a Bonnie-and-Clyde pair of bank robbers in the South. They appeared together again in Side Street (1950), where Granger is a part-time NYC letter carrier who swipes 30 grand and gets into big trouble.
Odds Against Tomorrow. Harry Belafonte, Robert Ryan, and Ed Begley plan a bank job that goes awry. Deals frankly with racism as Ryan and Belafonte strike sparks off each other. Shelley Winters co-stars. Striking location photography and great jazz score by John Lewis. Released in 1959. 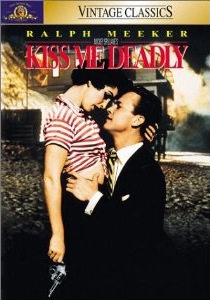 Criss Cross. Burt Lancaster and Yvonne DeCarlo play a former married couple rekindling an old passion when she marries slick heavy Dan Duryea. All goes south when the two men try to rob an armored truck. Great footage of Los Angeles in 1949.
Kiss Me Deadly. Ralph Meeker plays Mickey Spillane’s PI Mike Hammer in this 1955 classic from Robert Aldrich. Opens with that iconic image of Cloris Leachman flagging down a car barefoot on a lonely stretch of road. Never lets up, all the way to the apocalyptic ending.
Coming up: back to the Old West
Posted by Ron Scheer at 5:47 AM