Frank Collinson, Life in the Saddle 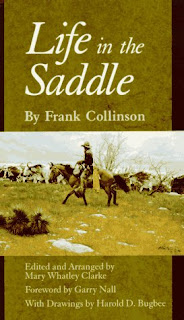 There were cowboys, and then there were cowboys. Frank Collinson (1855-1943) had a “life in the saddle” so full, it’s hard to believe it all happened to one man. Born in Yorkshire, England, he was nineteen on his first trail drive from Texas to Nebraska in 1874.

By the age of twenty, he’d become a buffalo hunter. When the “big kill” was over, four years later, he cowboyed for the first cattle barons on the western plains of Texas. Along the way, he fought Indians and, while in New Mexico, met Billy the Kid and cattleman John Chisum.
Ironically, maybe all of his story would have been lost if he hadn’t been persuaded to write of his early life for Ranch Romances in the 1930s. There today you’ll find numerous articles and a couple short stories written by him, illustrated by Texas artist Harold D. Bugbee, whose drawings also appear in this edition.
First published in 1963, Life in the Saddle is a memoir assembled from those writings for Ranch Romances, his letters, and interviews with people who knew him. It was put together by Mary Whatley Clarke, western historian and small town Texas newspaper editor, who seems to have had an eventful life of her own.
Violence and death. What’s startling about Collinson's recollections is the starkness of the picture he draws of frontier violence. Any fan of noir western fiction would find his historical West familiar territory. While he doesn’t dramatize the bloodshed, his portrayal of it is unflinching.
Death, in fact, is a prevailing theme. On his first trail drive across the Indian Territories, he has a 19-year-old’s foolish wish to tangle with Indians, then doesn’t see a single one. But delivering beef to the Sioux agency at Fort Robinson in western Nebraska, he gets a jolt of reality. The men look pretty fit (many six feet and over, he guesses, and 200 pounds), and among the women there are already many widows.
Returning to Texas, he partners with another buffalo hunter, Jim White, who had once taken a job with the U. S. Army in 1866, clearing the field of dead cavalrymen after the Fetterman Massacre. The next year White was at Fort Phil Kearny, Dakota Territory, when it was attacked by 3,000 Indians, who lost 1,100 of their number in the battle. White, an excellent shot and not given to exaggeration, told Collinson that he must have killed or wounded 50-60 of them himself.
A year after that, while in Fort Union in New Mexico, White shot and killed two Mexican officials who mistakenly tried to arrest him. On the run and pursued by a posse, he and a partner killed two more and left a wounded man behind to warn the others to give up the chase.
Death of animals. Collinson is matter of fact about the efficiency of the best buffalo hunters. The average hunter, Collinson says, took five shots to kill a standing buffalo. With a fifteen-pound Sharps 45-caliber buffalo gun, his partner White could typically do it with three. On a good day, he could get close to one shot per kill.
Collinson estimates that the total kill in Texas was 8 million during a period of 13 years. This took place, he says, over a vast area of west Texas, at a time before any settlements and where the law did not exist, federal or otherwise. The nearest trading post was Fort Griffin, 200 miles away, a considerable distance for getting supplies and delivering buffalo hides.
In the spring of 1877, he recalls taking two months to journey there with 11,000 hides, 6,000 buffalo tongues, and 45,000 pounds of salted buffalo meat. The tongues, he notes, were a delicacy worth a dollar each in New York.
Death by rifle shot, he suggests, was no less humane than the way the Mexican hunters (ciboleros) killed buffalo, chasing them and hacking at them with spears. Delivering cattle on the hoof to agency Indians, he was also witness to their method of killing:
The bucks shot arrows into the steers, cut their hamstrings with long, sharp knives, lanced them, and often jumped from their horses to fight with a particularly rambunctious animal. (p. 42)
More than once he comments on how populations of game and other wild animals disappeared from the ranges, with hunting for sport and the killing of predators. Panthers, bears, wolves, and coyotes were all marked for elimination. Horse slaughter was also not uncommon. In the U. S. Army’s efforts to subdue the Indians, herds of their horses would be captured and killed by the hundreds.
A detail of buffalo hunting and cattle drives I hadn’t come across before was the lack of regard for the young. Orphaned buffalo calves were left to starve or be taken by predators. Cows giving birth on the cattle drive trails were forced to leave their newborn behind.

On another occasion, a cattleman loses an entire herd of 2,000 cattle after trekking with them across an arid region during a long dry spell. Parched, the herd is bedded down within a few miles of the Pecos, when the night wind shifts and the cattle smell water.

In spite of the cowboys' efforts to turn them back, they stampede, only to plunge headlong over sheer cliffs into the river below. It is a scene repeated with a herd of sheep in Zane Grey's The Heritage of the Desert (1910).
Brief lives. Collinson himself lived to a ripe old age, but many he knew never made it that far. His hunting partner Jim White, who had escaped death by Indians more than once, was reportedly killed by Sioux while in Montana in 1881.
Another partner, George Causey, escaped having his throat cut by vigilantes, along with three horse thieves. Then some years later he took a bad fall from a horse and nearly died before he was found two days later. After a long hospital stay and marriage to his nurse, he complained of pain in his head and shot himself in the heart.
Where there’s no law, it’s hard to say which side a man is on. Collinson tells a story of a John Selman, who at one time was deputy sheriff at Fort Griffin. Also active with the vigilantes in this wild town, he was commonly in attendance at hangings of troublemakers.
Alas, he was something of a troublemaker himself, suspected of killing one of his ranch hands, allegedly for knowing too much about his employer. Selman fled Texas for New Mexico, eventually fetching up in El Paso in 1890 – as a lawman again. There, while taking yet another lawman into custody, he was forced to shoot him in self-defense.
Selman went on to become a footnote in history as the man who killed outlaw John Wesley Hardin in 1895, following an altercation between Hardin and Selman’s son. He was tried for murder, but released after a hung jury. A hard drinker, he was killed a year later when he got into an argument over a card game with a U. S. marshal, George Scarborough – who himself was later killed in a gunfight with two robbers. “So they all got what was their due, those Texas trigger-men,” Collinson observes.
More next time.
Picture credits: wikimedia.org
Coming up:
Posted by Ron Scheer at 5:47 AM