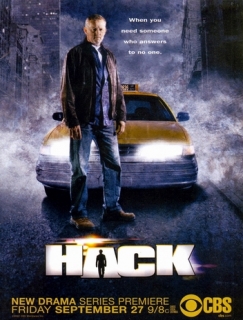 Bit of a departure today from the usual Tuesday western. We just finished the first season of the 2002-04 CBS series Hack. A police drama, it starred David Morse and Andre Braugher. The two men play former partners on the Philadelphia police force. Morse’s character, Olshansky, has been suspended for helping himself to some drug money, which in a weak moment he regards as “combat pay.” Braugher, as Washington, is at least equally culpable, but Olshansky abides by a code of honor that prevents him from cooperating with Internal Affairs and revealing what he knows about his former partner.

Olshansky has a family and is already separated from his wife as the series starts. A little late, he tries to salvage the marriage and rebuild a relationship with his young son (Matthew Borish). To make up for lost income, he takes a job as a cab driver, or “hack.”

A basically decent man, he’s also trying to recover a sense of self-respect, while suffering a load of Catholic guilt for screwing up his life. In particular, he has disappointed his father, a former cop who is shamed by his son’s dishonorable discharge from the police force. It doesn’t help that the man is a drunk and a past perpetrator of domestic violence.

In a supporting role is George Dzundza as Father Tom, the priest of an inner city parish and a lifelong friend of Olshansky. He has some problems of his own, including a history of gambling debts and drinking. Still, he’s Olshansky’s conscience as the former cop labors to set his life right.

Each week’s episode puts someone in Olshansky’s cab who is in desperate need of a helping hand. As a seasoned cop who knows how things get done in the city, especially on the shady side of the law, Olshansky becomes involved. A newspaper columnist writes him up as a “dirty cop” trying to redeem himself with good deeds. Olshansky simply can’t stay out of somebody else’s trouble.

Typically, he enlists the help of his former partner, Washington, to do the detective work he’d be able to do himself if he were still on the force. There’s also Morse’s sheer physical presence and his ability to really get rough when the situation calls for it. Both aspects of the plot are hugely satisfying, as the scenes between the two men bristle with fine dialogue from creator/writer David Koepp, and the physical violence is often explosive and well justified.

There is fine ensemble acting throughout, with guest appearances by John Heard, Martha Plimpton, Lindsay Crouse, and Bebe Neuwirth. The writing also avoids a lot of clichés common to the genre. Heather, Olshansky’s wife (Donna Murphy), is not the shrill adversary intent on avenging every grievance on her former husband. She still loves him, she says; she just can’t trust him.

The scripts also focus on Olshansky’s struggle to be the loving father that his own father never was to him. Morse and the boy’s scenes together are often difficult and touching.

We never really know until the final episode what happened during the drug bust that ended Olshansky’s career. We also never learn until then what he may be covering up about his partner, Washington—or for that matter the true character of the man himself. The series slowly reveals his behavior as suspect, but even to the end, while there are revelations about Washington, one can’t be sure what to believe.

It’s commercial TV, and commercials drive me nuts, so I never even heard of the show when it was running. I stumbled across it at netflix, where it can be streamed in HD (DVDs do not seem to be currently available). Watching a couple episodes a night, I found its style of storytelling a great pleasure, for it tackles issues that you don’t find in the usual cop show—issues of integrity, responsibility, friendship, trust, intimacy, character, and self-respect.

While it deals often with the dark underbelly of city life, it does not glamorize it, and it refuses to get cynical in the face of it. You see ordinary people attempting to live decent and honorable lives, always against the odds. And it’s gratifying to find a hero who is flawed but still a credible moral center in the crime-infested world he inhabits.

For more Overlooked Movies and TV, click on over to Todd Mason's blog, Sweet Freedom.