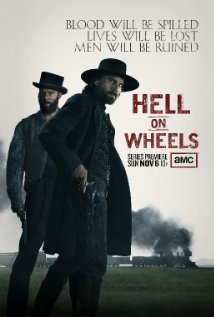 Matt Pizzolato argued this past week on his blog that what we need is more people reading westerns. The world, he says, would be a better place. Troy Smith devoted a blog page to an essay on “Gunsmoke.” Both writers celebrate the heroism and values to be found in western stories, where we can find men and women of principle, courage, and character.

Now, this is a review of the AMC series Hell on Wheels, which I got around to watching when it became available on DVD. I’d never got much past the first episode on TV because I have zero patience for commercials. Given all its production values, this story of men and women swept up in the grand scheme to put a railroad across the country is compelling entertainment.

But I’d argue that it’s a poor example of the kind of western Matt and Troy are talking about. For me, the main problem with Hell on Wheels is the total vacuum at the center of it. Bohannon, whom I take to be the main character, is a cipher. Not for any bad acting. Anson Mount is fine. All the acting is fine.

However, Bohannon’s only reason for walking the face of the earth is to avenge the deaths of his wife and son, who have died along with a household servant at the merciless hands of a detail of Union soldiers. He will seek them out and kill them one by one, even it if means [SPOILER COMING] taking the life of the wrong man.

There’s little I can see that’s heroic about Bohannon. He may establish an uneasy alliance with the black section worker Elam Ferguson (Common). He may say that he freed his slaves before the War, though not from any principle except to please his wife. But as he admits to the preacher (Tom Noonan), he is already dead and headed for hell.

By comparison, Common’s character is thoroughly alive, and comes far closer to being a man of principle and courage. The clearest evidence is in his dogged determination to act and be treated as a free man. His attachment to the prostitute Eva (Robin McLeavey) and the intimacy in the scenes between them also show him to be living, breathing, and feeling, unlike the haunted, sullen Bohannon.

As an avenger, Bohannon is fearless, but vengeance and justice are not the same thing. We know this from the traditional western which, as in Jack Schaefer’s Shane, permits killing only in self-defense. The real west may not have been quite like that. Read Carol Buchanan’s God’s Thunderbolt: Vigilantes in Montana for an example. But the values that a man like Matt Dillon represents call for the civilized use of the judicial process for capital crimes.

Gunsmoke. What we like about Matt Dillon is the fundamental decency of the man. His courage and his principle would be shallow character attributes without it. Despite the opening footage of the gun duel in the street that opened every episode, Matt was not a gunfighter. In an early episode, he’s actually shot by another man who is a faster draw.

Though he carried a gun, he would avoid using it unless required to by necessity. As a lawman, he had responsibilities to the citizens of Dodge. He put his life on the line every day, for poor pay, and was nevertheless incorruptible. A man of integrity, he passes Matt Pizzolato’s test for the traditional western hero. He was a man of his word.

Can you imagine him in Hell on Wheels? I can’t.

Unforgiven. Matt also brings up Clint Eastwood’s Will Munny in Unforgiven. Munny is no Matt Dillon either. He’s a hired killer, and the women he is avenging are paying him to do the job. Also, the killing of a young cowboy when it happens is an ambush (not like Shane’s shootout in the saloon, where he faces down his adversaries). Not so heroic.

All the same, we accept him as a hero, because there’s some of that same basic decency in the man. The scene outside the shed when he talks to the whore who’s been cut up never fails to move me to tears. He honors and respects her, despite her occupation, and reveals something of the grief he still carries from the death of his wife.

The vengeance he takes on Little Bill (Gene Hackman) for the torture and death of his friend (Morgan Freeman) is an agony to watch, because we see him reduced to what he’d promised his wife he’d never be again—a brutal murderer. He has betrayed his own ideals as a reformed man.

Wrapping up. In Unforgiven, we see the western falling astride two different and opposing creeds. One creed is “an eye for an eye.” The other is the Golden Rule, “do unto others as you would have them do unto you.” It’s hard to follow both creeds and do the right thing, yet the western hero is often called upon to do just that.

We’re smart. We know this about the world. There are times when the moral authority of a man like Matt Dillon is not enough to confront whatever injustice or evil threatens us. We acknowledge the need for someone willing to get rough, even at the expense of our highest ideals. But we need to believe that such bringers of justice are decent men.

Which brings me back to Bohannon. He is not a decent man and thus not a character I want to identify with or even care about. Hell on Wheels may be a helluva story. And there’s a good deal of interesting fact mixed in with the liberties it takes with history. But one thing for sure, it’s not a "decent" western.