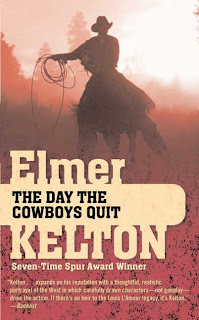 Kelton's novel has many of the elements of pulp western fiction - big ranchers against the little guys, justice at the end of a rope, an honorable hero wearing a sheriff's badge - but he also brings a great deal of insight, experience, and historical background to the task of telling this story. It is enjoyable and full of well-drawn characters and unexpected turns of plot from beginning (a squabble over the brand on a cow) to the end (a gripping courtroom drama).

The title suggests that the book might be a more light-hearted story that focuses on the cowboy strike of 1883, but Kelton's aim is to explore the more complex psychology of the men who live by the Code of the West. The ill-fated strike is over before we are well into the book, and the author focuses on the unexpected and far-reaching results of its aftermath.

Like many books about the West, this one is about loss and the passing of an era. The cowboy way of the open range land is quickly disappearing as settlers move in and towns spring up, the cattle business falls under the influence of venture capital from the East, and rough justice must give way to law and order.

Most enjoyable for this reader is the characterization of its main character, Hitch, a single cowboy in his thirties for whom circumstance, loyalty, and honor lead him out of a job he loves and into harm's way, until he reluctantly assumes a role of no small responsibility and risk in the new social order on the Texas plains. Not the fearless hero of standard cowboy fiction, Hitch has a good many conflicting feelings, he's more diplomatic than quick with a gun, and his actions require considerable courage.

Kelton's rural Texas background and knowledge of frontier history clearly come through in the many details that enrich the tale he tells. He notes a horse's dislike for flapping laundry on a clothesline. The cowboys drink more strong coffee than whiskey. He realistically describes a man's slow, painful recovery from being pistol-whipped. A man angrily observes the terror of a cowboy who wet his britches as he was being hanged for thievery. And there is much about managing cattle on the open range and the complicated, never ending process of ensuring their ownership.

I highly recommend this book to anyone with an interest in the historical West, cowboys, roundups and branding, frontier social history, the landscape of the plains, frontier justice, the Code of the West, and the struggle for political power and shifting alliances in changing times. Kelton's book is well-written, with memorable characters and a fair share of suspense.