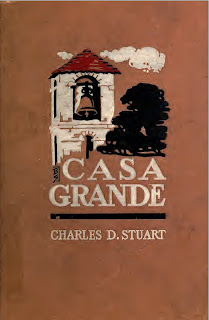 The “big house” of the title is the comfortable home of a gringo ranchero, John Miller, who has acquired a former land grant in Sonoma County, California. It’s 1858, ten years after the war with Mexico that gave California to the Americans. His problem is that squatters began to settle on his 7,500 acres before he was able to prove ownership in court. Now he has to enlist the local sheriff, Sam Bailey, to evict them.

One family does not leave without a fight. The Clarks, a widow and three grown children, make a last stand, and the daughter, Belle, puts a rifle shot through Bailey’s arm. This is a bitter development for the sheriff, who’s been sweet on 19-year-old Belle for some time and has matrimony in mind. The central character of this “California pastoral,” as it calls itself in a subtitle, is Miller, and the story concerns an attachment that develops against all odds between Belle and himself.

Plot. Belle cannot forgive him for forcing her family off a homestead that they’ve improved and lived on for eight years. It doesn’t matter that at his own expense he helps them rebuild a home on nearby public land that is available for settlers.

When intruders attempt to set fire to one of his barns, he and his vaqueros take shots at them as they flee into the night. The single one of them who takes a hit turns out to be Belle. Her injury is life threatening, and Miller’s emotions are tinged with awareness that it was a shot from his pistol that felled her.

As her condition worsens, she develops paralysis that leaves her near death for several days. Miller’s old friend, Dr. Payne, a former army surgeon, is called from his practice in San Francisco to save her. His wife, Mabel, bored with city life, comes along later for a stay at Casa Grande, to look after the recuperating Belle. Though each would deny it, she quickly sees romance budding between the girl and Miller.

A novel of no particular interest up to this point comes to life as Mabel attempts to avert what she sees as a bad match. The difference in social class, she believes, makes Belle poor marriage material for Miller. The girl may be pretty and spirited, but she is handicapped by her caste. She cannot compensate for the lack of good breeding that produces a truly refined and respectable wife.

When she recovers her health, a misunderstanding between the two lovers separates them long enough for Bailey the sheriff to renew his suit for her hand. But it’s Miller she wants, and she makes this known with a campaign of gently but persistently stalking him. On the final pages, author Stuart finally brings them together in a pastoral setting thick with blooming azaleas.

Character. Miller is first and last a gentleman. He might behave coldly toward the Clarks by driving them off his land, but he tries to be reasonable with them and never loses patience.

Out of a sense of fairness, he offers to pay for the improvements they’ve made or to sell the land to them. But they won’t willingly move, and they won’t buy what they consider their rightful property. When they’re arrested and put in jail, Miller tries to pay their bail, but they won’t accept his charity. They finally relent and allow him to help them relocate.

His care for the injured Belle, letting her family move into his house as she slowly recovers, comes from a sense of obligation as well. But while there is decency, there's no great warmth in the man. Think noblesse obliges. He proves himself worthy of respect by showing that he can be even-handed in his dealings with people of the lower social orders. Though the unchallenged master of his vaqueros, for instance, he takes his meals with them.

While Sheriff Bailey might win our sympathies, he is too clearly self-serving in his dealings with the Clarks. Next to Miller, he is coarse and unpolished, a man of modest means and not a real gentleman.

Romance. Most telling are Bailey’s expectations of romance. His view of the relationship between Belle and Miller is colored by his own class bias. He thinks Miller is playing with her emotions and will eventually discard her as a plaything he’s become bored with. He even says so to Miller.

He also assumes he can win Belle’s hand by being the provider he believes Miller will never choose to be and a better one than anyone else. He has property and some small degree of social position. With these added benefits, he expects her gratitude to eventually blossom into love for him.

Romance seems a bit of a mystery to Stuart. For him, romantic attraction springs unconsciously within male and female. Their awareness filled with what is required of them by social expectations and class standards, they are not tuned in to the rising and falling tides of their own emotions. Thus, instinct works quietly to draw them together, romance finally taking them by surprise. Whether that makes a good story, however, is open to question.

Wrapping up. Charles Duff Stuart (1854-1929) left little trace of himself as a writer. California-born, he is identified in one contemporary source as a public accountant in San Francisco. FictionMags Index lists all of two stories, both appearing in The Blue Mule and both published in 1906—a year also noted for its earthquake. In 1908 another story appeared in Sunset Magazine. Other publications show an interest in beekeeping.

Casa Grande is currently available online at google books and Internet Archive, and for the nook. For more of Friday’s Forgotten Books, skip on over to Todd Mason's blog, Sweet Freedom.