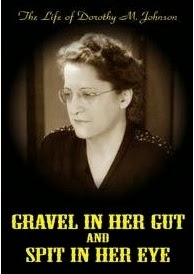 A BITS reader recently sent me a copy of this 30-minute video made for Montana PBS about the life of western writer Dorothy M. Johnson (1905-1984). It is an informative, entertaining, and expertly told account of a determined and inventive writer who made a difference in the way western stories are conceived and told.

Her influence remains a strong presence in the unfolding genre of frontier fiction today. Hers was an intelligence that inquired of both myth and history and returned from that inquiry with discoveries that many other western writers, steeped in convention, could not see, or did not care to—a condition, alas, that sometimes continues in places today.

There are a number of talking heads in the video, and the memories of those who were friends, students, and acquaintances reveal much of her temperament, her humor, and her grit. With Margot Kidder as the voice of Johnson and Stan Lynde as narrator, the warmth and affection for the western story that Johnson brought to its writing come persuasively through.

The efforts of others to put into words the genuine contribution she made to western storytelling fall a bit short of really measuring her stature. Academics interviewed fall into what feel like tentative generalities about how she anticipated the “revisionism” of the 1960s and 70s. Even the late Elmer Kelton seems to regard her only as an accomplished woman writer. And while he may rank her with Mari Sandoz and Willa Cather, why does she not bear comparison with others who happen to be male?

Altogether, director Bill Bilverstone and writer Sue Hart have paid honest tribute to their subject. They include many photos of Johnson over her lifetime, and their narrative reminds us of the lean times she lived through and survived as a struggling writer, working for many years in New York, far from her home ground in Whitefish, Montana—before The Saturday Evening Post and then Hollywood found her.

Wrapping up. At the time of the film’s release, writer-producer Sue Hart noted that people know the films based on Johnson’s stories but do not know of Johnson herself;  “I wanted to make sure that people never forget her.” This video bio makes a notable effort to rectify that.

Gravel in Her Gut and Spit in Her Eye is currently available on DVD from Montana PBS. For more Overlooked movies and TV, click on over to Todd Mason’s blog, Sweet Freedom.