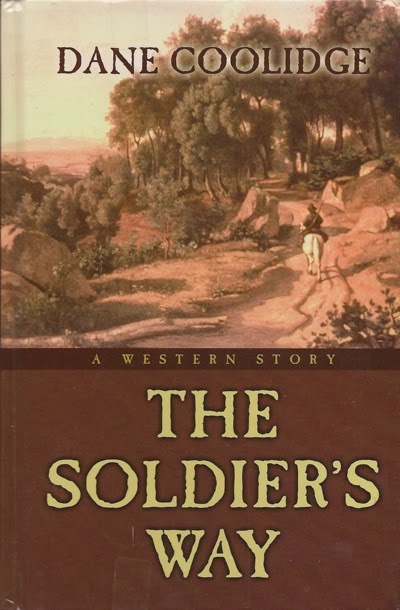 This is a ripping yarn set among a band of American mercenaries and soldiers of fortune during the last years of the Mexican Revolution. It appeared first in 1917 as a four-part serial in The Popular Magazine. While prepared in a book-length version by Coolidge, it was not published as such until 2006 by Five Star.


Plot and character. The story is based on that of the so-called Gringo Battalion that fought in the army of revolutionary general Pancho Villa. Coolidge singles out two Americans from among them to illustrate the daring, the egoism, and adrenalin-fueled risk taking that drive the actions of such men.

One is the Irish-American Beanie Bogan, who with the rank of sergeant commands the respect of a small “legion” of American fighters, most of them deserters from the U.S. Army. The other is Bruce Whittle, a descendant of the Scots warrior hero, Robert the Bruce. While Bogan is all business, a skilled leader of fighting men and a veteran of combat, Whittle is a man seeking oblivion in death on the battlefield. The girl he passionately loves has married another man.

In spite of himself, Whittle has an instinct for survival that not only keeps him alive. His high-risk exploits earn him popular acclaim, while making him an outlaw at home. As a U.S. citizen he is deemed guilty of violating his homeland’s official policy of neutrality in the conflict.

Set on the international border along the Rio Grande, the story starts on the U.S. side in Del Norte, where Bogan recruits Whittle into the “foreign legion” fighting under Col. Gambolier, a French military consultant to revolutionary general Pepe Montaña. The underfed, poorly armed, and undisciplined army of revolutionaries is camped in the mountains above the garrison town of Fronteras, well defended by government troops. Military progress is at a stalemate.

In a strategy to isolate the town in advance of an attack, Bogan and Whittle accept a mission to dynamite a key bridge on the railway from the interior. Their job done, they find themselves betrayed by Montaña and Gambolier. This sets in motion a series of plot turns that has the Americans assembling their own assault on the town. The remaining chapters are an account of fierce street fighting, as they make their way by night and house by house to the central plaza to lay siege to the government strongholds.


Storytelling style. The suspense and excitement in the writing is thoroughly ramped up by Coolidge, who is masterful in evoking the intensity of adrenalin-driven action. There is a high-pitched rhetorical style at work that includes bracing dialogue and eloquently rough talk meant to raise the hair on the back of the neck of anyone within earshot.

There is a density to the prose that makes a lot of current narrative writing seem pale and thin. I kept marveling at the richness of experience Coolidge was attempting to capture in words. He seems surely to have been after a sense of total immersion for the reader. Part of that owes to the way he observes the scene where action takes place. One can look for and find the spirit of T. S. Eliot in this image drawn of two men waiting their fate in the desert, after being outnumbered in a firefight with enemy troops:

An hour wore on miserably, and, beating up against the wind, a pair of ravens came over from the distant mountains to hover over the unburied dead.

Romance. For all that, Coolidge keeps a distance from romanticizing combat. While Bogan demonstrates battlefield heroics, a brilliant mix of bravery and intelligence, Whittle is disillusioned by what he observes of warfare.

Its generals were palterers, its soldiers were cowards, its battles mere wars of words. They rushed at each other like angry dogs, bristling and snarling and showing their teeth, and then, after each ignoble encounter, they drew off grimly and growled.

It is for Whittle finally to find resolution in the love of the young woman, Constance, who has followed him to Del Norte despite the merciless intentions of her vengeful husband. In the closing chapters, both she and her husband appear with roles to play in the heat of battle. And when the fight for Fronteras is won, the obstacles stubbornly preventing the triumph of romantic love are removed, and then darkly.

Wrapping up. Dane Coolidge (1873 – 1940) was born in Massachusetts and grew up among the orange groves of Riverside County, California. A graduate of Stanford University, he studied as well at Harvard. A naturalist and field collector of desert animals, he was also a wildlife photographer. He traveled widely in the Southwest, and his familiarity with its terrain, climate, and peoples informed his fiction, including more than two dozen western novels and numerous stories in the magazines.

The Soldier’s Way  is currently available in print and ebook formats at amazon, Barnes&Noble, and AbeBooks. For more of Friday’s Forgotten Books, click on over to Patti Abbott’s blog.
Tweet