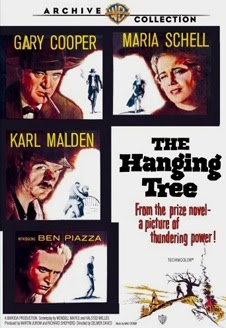 Based on a novel by Montana writer Dorothy M. Johnson, this western film is a dark study of mob violence. By unfolding the backstory preceding the attempt to lynch a man (Gary Cooper) in a Montana mining camp, it traces a tangled web of deceit, lust, self-righteousness, and avarice.

Plot and characters. At the center of it is Cooper, whose character is a mix of good will and a shadowy past. Though physically strong and a skilled doctor, he lives under an assumed name, Frail, as a reminder to himself that he is weak and vulnerable in ways that are otherwise hidden.

A loner, arriving with a packhorse in the Montana gold fields in 1873, he allows two people into his life, while keeping each of them at a safe emotional distance. One is a young thief (Ben Piazza), shot by pursuers and rescued by Cooper, who removes a bullet from his chest, then retains him as an unpaid bond servant.

The other is the lovely Maria Schell, a Swiss emigrant to the West, whose father is killed in a stage holdup. She nearly dies of exposure in the mountain wilderness before being found, blinded and burned by the sun. Nursed back to health by Cooper and recovering her vision, she falls in love with him. He eventually sets Piazza free, and unknown to Schell, he grubstakes a mine she and Piazza invest in.

The villains of the piece include a prospector (Karl Malden), who takes an unseemly proprietary interest in Schell. Another is a faith healer (George C. Scott), who considers Cooper an unwelcome competitor and warns anyone willing to listen that he is in league with the Devil. A merchant’s wife (Virginia Gregg) representing the “respectable element” in town attempts to interfere between Cooper and Schell and accuses her of harlotry.

Ill will builds against Cooper, as he reveals himself to be a sharp card player and willing to draw a gun to stop anyone challenging his right to claim his winnings. There are also rumors that he once burned down a house back East—with two occupants still inside. When he rescues Schell from an assault by Malden, shooting to kill, there is not enough sympathy in town to keep him from the hangman’s rope. He is saved only by the greed of the mob, willing to be bought off with gold.

Themes. The story offers an argument about love, trust, and freedom. In a key scene, Schell leaves the cabin where she is recovering under Cooper’s care. Outside, she is panicked by the sound of a passing stagecoach. Cooper scolds her, telling her to open her eyes and see things for what they are. “Don’t go through life with eyes closed,” he says, though he obviously hasn’t followed his own advice. He doesn’t want to see how much she has come to love him. He’s also blind to the loving respect that has grown for him in the young Piazza.

Malden, Scott, and others in the settlement also have their willful blind spots. They choose to see what they want. The mob scene at the end is the most dramatic example, as the discovery of a rich strike and expectation of a bacchanalian celebration lead to drunken chaos and setting fire to the town, before the release of rage and blood lust that drags Cooper to a hanging.

Vision does not come to him until he stands on a wagon bed under the hanging tree with a rope around his neck. And the final moments of the film are a tribute not to the triumph of romantic love such as the western has typically endorsed, but to the healing grace of forgiveness and absolution. Cooper bends to softly embrace Schell’s face as Piazza looks on. The doctor’s eyes have been opened, and he is finally a free man.

Wrapping up. Cooper, looking taller and leaner than ever, is wonderful in his performance of a complicated and conflicted man. The film was directed by Delmer Daves (3:10 to Yuma, 1957) from a screenplay by Wendell Mayes (Anatomy of a Murder, 1959) and Halsted Welles (also 3:10 to Yuma). It was shot in Technicolor and widescreen on location in Yakima, Washington. The theme song is sung during the credits and again at the end by Marty Robbins.

The Hanging Tree is currently available at netflix, amazon, and Barnes&Noble. For more Overlooked Movies and TV, click over to Todd Mason’s blog, Sweet Freedom.
Tweet

Further reading:
Commentary on Gary Cooper and The Hanging Tree by Jake Hinson at Criminal Element