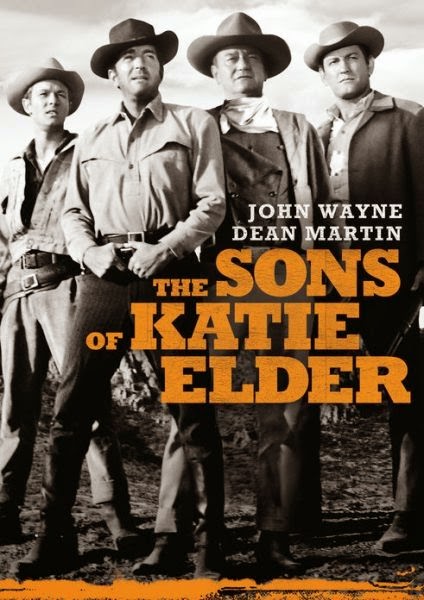 A frequent complaint about westerns is that there are few strong roles for women. Katie Elder, the title character of this John Wayne film would be an exception, except for the fact that she is dead. Her four sons, as the film begins, are gathering for her funeral. As they talk about her, we learn that she overcame all manner of adversities and obstacles and remained proud of her offspring, despite the fact that they have done little to deserve her high regard.

Wayne, the eldest, has a reputation as a gunslinger. One brother (Dean Martin), is a gambler and wanted for murder. The other two (Earl Holliman, Michael Anderson, Jr.) have yet to make a mark in the world, though Anderson refuses to get the college education his mother wanted for him and intends instead to follow in Wayne’s adventuring footsteps.


Plot. A pack of trouble waits for the brothers as they are reunited and discover that the family ranch has been sold to a local gunsmith (James Gregory), who also seems implicated in the death of their father. The plot of this two-hour film is not complicated, but as it meanders from one incident to another it gets to seeming loosely connected and over-long.

Scenes of comic relief (e.g. Martin’s “glass eye” and brotherly disputes that escalate into brawling) alternate with darkly ominous suspense and shoot outs. As the story boils down to a contest between the four heroes and the villain who is trying to eliminate them, it’s hard to know what’s at stake beyond learning who finally lives and who dies.

Wrapping up. Though it may not matter to hardcore western fans, the film as it was released had numerous technical and continuity problems, and at least one factual error involving the fate of the Dalton Gang. If you are watching closely, they get to be an unwelcome distraction. Go to IMDb for a full and exhaustive list. In an appreciation of John Wayne’s performance, it should also be remembered that at the age of 57, he had recently undergone surgery for lung cancer.

Set in Texas, the film was shot in Durango, Mexico. Director Henry Hathaway is remembered for several other notable westerns, including True Grit (1969), Nevada Smith (1966), North to Alaska (1960), Garden of Evil (1954), and Rawhide (1951). The Sons of Katie Elder is currently available on DVD and online at Netflix, amazon, and Barnes&Noble. For more overlooked movies and TV click on over to Todd Mason’s blog, Sweet Freedom.
Tweet