Here’s a top-15 list of novels, novellas, and short story collections by writers of frontier fiction reviewed here at BITS this year. Like last year, it’s a mixture of old, not-so-old, and recent. Click through for the full reviews.

After the muddled The Bounty Hunters (1953), Elmore Leonard’s skill as a novelist took a quantum leap forward with this novel. Hombre is a tense western thriller that is also a fascinating study of an enigmatic character. That character is John Russell, the “hombre” of the title. More.

One reader has compared this novel to No Country For Old Men because of a murderous central character, John Cload, who brings to mind yet another dark work of fiction The Silence of the Lambs. Cload is more than a little like Hannibal Lecter, as he befriends a deputy sheriff who keeps him company from outside his jail cell through long, sleepless nights and escorts him to and from the county courthouse where he is under trial. More.

Since reading Carol Buchanan’s excellent Spur Award-winning God’s Thunderbolt a while ago, I have been meaning to get to its sequel, Gold Under Ice, which continues the story of frontier lawyer, Dan Stark. In the 1860s gold-mining community of Virginia City, in territory that is now part of Montana, he finds himself an active participant among a group of vigilantes, who hang a number of thieves and killers, who have been menacing the lives and welfare of more law-abiding residents. More.

I was drawn to this recent novel by its theme—a perilous journey into Mexico, which as a subgenre of the western in both fiction and film continues to fascinate me. I already mentioned this a while ago in a review of The Wonderful Country. As a theme, it can be traced back at least as far as Stephen Crane, whose story “One Dash—Horses” (1896) tells of an American adventurer’s scary encounter with Mexican rurales. More.

Dane Coolidge, Rimrock Jones (1917). Leave it to Dane Coolidge (1873 – 1940) to write a love story that is 90% about greed, high finance, the stock market, and mining law. Set in the deserts of southern Arizona, this novel pits its title character, a hard-drinking, gun-toting miner, against a railway tycoon in a struggle for ownership of a multi-million dollar copper mine. Between them is a deaf (we would say hearing-impaired today) freelance typist, with her own interest in both the mine and Rimrock Jones. More.

Eleanor Gates, The Biography of a Prairie Girl (1902). This autobiographical novel begins with one of the finest pieces of writing I’ve found in more than 100 books of early frontier fiction. Eleanor Gates begins her story with the birth of her central character on a remote Dakota homestead during a raging blizzard. The family waits with growing dread the return of the newborn girl’s father, who has ventured into the storm for help. More.

This is a novel for every reader who wanted Deadwood to go on indefinitely. In The Richest Hill on Earth, Montana writer Richard Wheeler turns his particular storytelling skills to an account of the copper mining town, Butte, at the turn of the last century. Here there are familiar names: William Andrews Clark and the other copper kings as they dig fabulous fortunes from a mountain slope near the Continental Divide. And there are the many who do the digging, as well as those scratching out a living above ground. More.

A warning should come with this western novel: “May Break Your Heart.” Hoffman lets the bittersweet sadness of her story creep up on you unsuspected for the length of this short novel rather like Jack Schaefer’s Shane (1949). In a similar narrative device, Hoffman has her story told by an older man remembering an episode from his youth. The boy, Jamie Wagner, is a teenager looking for work when he comes upon the horse ranch of Chino Valdez, a reclusive man of few words. More.

Other Men’s Horses has several elements of a typical western plot: a Texas Ranger, horse thieves, a cavalry officer, a sheriff, a lynch mob, and a long pursuit over sparsely settled frontier. At the center of the story is Texas Ranger Andy Pickard, out to bring in a man for trial who has killed another man over the theft of a horse. More.

As a writer of popular fiction, Rex Beach hit the ground running in 1906 with this, his first published novel, set in the gold rush days of Nome, Alaska. Its story was based on actual events and portrays attempts by crooked lawyers, politicians, and a judge to jump claims of legitimate miners already extracting fortunes from the gold fields. More. 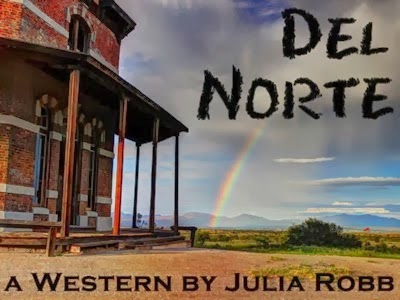 This dark western novella from Texas writer Julia Robb begins appropriately with the gravestone of a murdered man. The stone leans against an interior wall of a saloon, the Del Norte of the story’s title, owned and operated by a Mexican woman, Magdalena Chapas. We’re in a dusty garrison town in West Texas. The year is 1870. More.

This is a much overdue review for this enjoyable collection of Paul Powers’ western stories edited by Laurie Powers. Half of them were previously published during 1947-1953 in various pulp magazines. Six of them were published here for the first time. More.

A complaint I have about the traditional western is that they are often humorless. They take place in a kill-or-be-killed world where every action taken and every word spoken are typically dead serious. You won’t find this to be true in the cowboy western at its beginnings. Owen Wister found room for humor in his fiction, both humor and comic irony, even while his stories could take up darker turns of plot, like hanging horse thieves, cruelty to animals, and gun duels at sundown. Prosch is much the same. More.

First published in 1891, this collection of stories challenges beliefs about life on the frontier that persist in the collective imagination still today. Set variously in the upper Mississippi Valley and as far west as Dakota, they cast the homesteading farm family in a harsh light robbed of any myth or romance. More.

As part of his education of a pulp writer, David Cranmer has been reinventing the traditional western over the past several years with his introduction of two deputy U.S. marshals, Cash Laramie and Gideon Miles. The two peace officers work out of 1880s Cheyenne, Wyoming, bringing in malefactors, felons, and fugitives from justice, of which as we know, there were plenty in the Old West. More.