Get your popcorn and go to the rest room now, because you don’t want to miss a minute of this one. 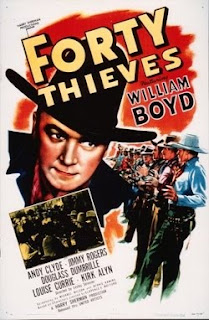 The story begins. There’s exciting music, and we quickly find out that Hoppy is a town sheriff and he’s been bringing in the outlaws, one bunch after another. Newspaper headlines trumpet his successes with exclamation marks!
Deputy California Carlson is doing one of his comic routines as he stands on a stack of boxes beside a sign: “Re-elect Hopalong Cassidy for Sheriff.” He practices delivering a speech to an imaginary audience (well, there's one kid watching) but loses his balance and falls into a horse trough. Ha-ha-ha! Hoppy and Deputy Jimmy Rogers come along and laugh, too.
Fresh out of prison, here comes bad guy Tad Hammond. Serving 20 years for rustling cattle and now out on parole. He doesn’t like Hoppy and makes no bones about it. “My trigger finger doesn’t itch anymore,” he says, “except when I see you.”
Inside the saloon, Hammond is persuading saloon owner Jerry Doyle to run against Hoppy for sheriff. Doyle looks like he could be a nice guy, but Hoppy has been keeping the town too law-abiding, which cuts into his business.
Hammond says he’ll bring in his old gang members from where they’ve been hiding out in Indian Territory. There are 40 of them. That’s where they got the name for the movie. Together, they’ll run Hoppy out of town.
Next thing, we see all of them getting together on their horses. It’s Election Day and they’re going to foil it up, which they do. They spread a rumor that the election has been postponed and do other things. Finally they’re stuffing the ballot box when nobody’s looking.
Bar 20 cowboys. Word gets out to the Bar 20, and Buck Peters rounds up the cowboys to ride to the rescue. They meet some of Hammond’s men at a river crossing, and there’s a shootout with a lot of lead flying. Bang-bang-bang. Maybe 70-80 shots – but no casualties.
Finally Hoppy rides out to stop it. He scatters the gang’s horses and captures five of the men to take back to town. Two of them he gets by lassoing them off their horses. 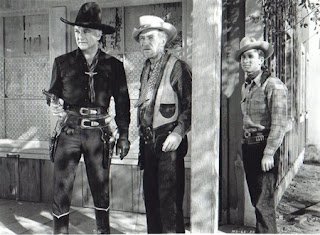 Problem is, when he gets back to town, there’s a new sheriff. Doyle has won with 133 votes to 120. “There was more votes than voters,” California says.
Hoppy keeps his sense of humor and turns over his job to Doyle. Hammond sees to it that all the gang get to be deputies. It’s looking like the fox has taken over the chicken coop. Judge Reynolds figures there’s been some irregularities and wants to take it to the governor.
Hoppy is all for democracy and the orderly turning over of duly elected authority. But Hammond and his gang aren’t done with him. They’re in the saloon, which is doing a brisk business now. Some of the gang sit at a table discussing what to do with Hoppy. Hammond deals out a poker hand all around. The one with the best cards gets to kill Hoppy and collect $2,000.
Confrontation. Hoppy walks in on this and when the man with the best hand refuses to take a shot at him, Hoppy tells the new sheriff he better make some arrests – for conspiracy to murder. But the new sheriff is too scared to do anything. So Hoppy gives the whole bunch 12 hours to get out of town. He’s going to take charge if no one else will.
He turns his back and walks away, but he’s watching them in a mirror, and when there’s a move to draw on him, Hoppy turns quick and fires. In fact, there’s a lot of gunfire, maybe 15 shots. Bang-bang-bang. Hoppy shoots out the lights, and the whole place goes dark, which brings an end to it. 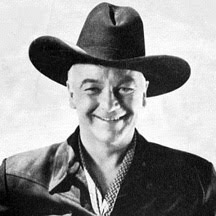 Come the next day, it’s noon and Hoppy and California are having a nice lunch with the Judge and his daughter Katherine who Deputy Jimmy Rogers has been trying to hit on, but with no luck. She doesn’t care much for him.
California tries to make a Dagwood sandwich out of the food left on the table, but it’s so big he gets his jaw locked open trying to take a bite. Hoppy has to rescue him by squeezing his mouth shut. Ha-ha-ha.
Meanwhile, Hoppy and the Judge are looking at the ballots and figuring out that the ones cast for Doyle weren’t printed right. So they've got evidence they need to take to the governor.
Showdown and getaway. Then there’s a big scene where the gang has saddled up to go for a ride. Hoppy is walking down the middle of Main Street toward the gang, looking like he means business. When Hammond says they’re leaving town, Hoppy notices there are only 37 of them. Three are missing.
Hammond gives a signal, and the three missing men try to take shots at Hoppy. Hoppy spins around and nails one of them who’s behind a barrel. California takes out another one who’s leaning out an upstairs window with a rifle. But Hoppy takes a shot in the arm from the third guy. 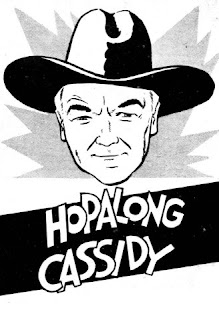 The gang is too intimidated by Hoppy, and they head out of town. Which is where they are, up on a hill, when they see a stagecoach coming in the distance. Katherine and Deputy Jimmy Rogers are inside on their way to the governor.
The gang descends on the stagecoach, which takes off fast, but the driver gets shot. Jimmy climbs out of the moving coach and takes the reins. But it’s no good. The gang stops the coach and takes Katherine and Jimmy hostage.
We next see California in town entertaining three kids in the street with a tall tale about some brave exploit of his. A rider passing by throws a knife that sticks in a post beside California’s head. When he realizes what’s happened, he falls into a dead faint. Ha-ha-ha.
Attached to the knife is a note from the gang. Hoppy is supposed to meet them, and they’ll let the hostages go. He says he’ll do it, but takes along Doyle, who’s not so happy about how things are turning out for him as the new sheriff. He's sitting in his saloon drinking. Meanwhile, California heads out to the Bar 20, and Buck Peters rounds up the cowboys again to come to the rescue.
Big finish. While the gang is busy taking shots at Hoppy and Doyle, one of them stands guard over Jimmy and Katherine, who are tied up under a tree. But Jimmy gets free, and he jumps the guy when he's not looking and grabs his gun. By this time the Bar 20 cowboys have arrived and there is a whole lot more shooting. 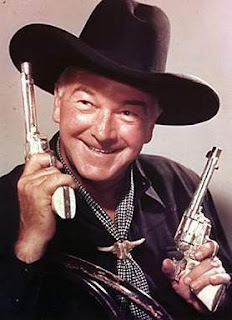 Thinking they’ve shot Hoppy from a distance, the gang is surprised when he shows up, not in his black outfit but dressed like Doyle. He’s chasing after Hammond now, both of them on foot. They’re exchanging gunfire, but when Hoppy runs out of ammunition, he tosses the gun away and keeps running.
There’s high drama now, literally, as Hoppy chases Hammond out onto a narrow footbridge across a canyon. In the middle of the bridge, they are going at it, throwing punches, and trying to knock each other down. Jimmy and Katherine are watching from below.
Hoppy loses his footing but gets back on his feet again. Hammond goes down next and finally slips over the side. He’s now out of the picture, and the bad guy is no longer anybody’s problem. The gang, already on the run, will be heading back to Indian Territory.
In the last scene, California has put up a new sign. He’s running for sheriff now and the same thing happens. The stack of boxes he’s standing on collapses and he falls. Hoppy goes to pick him up, and together they say, “Why did we ever get into politics?” Ha-ha-ha.
Music rises.
THE END
Movie credits:
William Boyd         Hopalong Cassidy
Andy Clyde            Deputy California Carlson
Jimmy Rogers        Deputy Jimmy Rogers
Director                  Lesley Selander
Screenplay             Michael Wilson, Bernie Kamins
Picture credits:
1) Movie poster, hoppyandthebar-20.50megs.com
2) Hoppy, California, Jimmy, production still from Forty Thieves, dorothysebastian.com
3) Hoppy, "the brand", jimwegryn.com
4) drawing of Hoppy, bdportugal.info
5) Hoppy in color, spiritofthebear.com
Coming up: Reviews of The Professionals and Broken Arrow
Posted by Ron Scheer at 10:00 AM