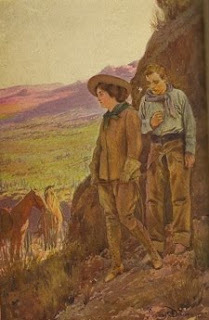 The love story. Yes, like The Virginian, there is one. And it’s there, I suspect, for the same reason – to appeal to the tender-hearted in the audience. Wister gave us a schoolmarm from Vermont, you’ll remember. Coolidge gives us two women, Lucy and Kitty, from San Francisco, and he complicates their relationships with the two men, Hardy and Creede, in ways that would take paragraphs to sum up. Put simply, Kitty breaks both men’s hearts. Neither of them is able to see that she’s manipulative and self-centered.
Lucy is the patient, loyal friend, who young Hardy has to discover is his true sweetheart. Kind of a role switch from Wister, whose character Molly has to learn that the Virginian is her true sweetheart. Coolidge even borrows a scene from Wister when he has Lucy nursing our hero Hardy back to health after a trauma. For many modern readers, this thread of the story may be more cloying at times than the courtship of The Virginian and Molly.
The sentimentalizing of "true love" takes the narrative out of the real West of 1910. The women bring with them the mores and social customs of young middle-class city dwellers. Like Wister's Molly, they are fish out of water here. But unlike her, they do not yield to the realities of the frontier. While Molly comes to accept the hanging of horse thieves without benefit of trial, Coolidge's Lucy successfully prevents Hardy from using his gun against the sheep men. 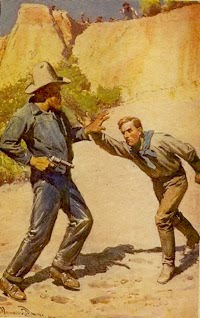 Meanwhile, the book acknowledges that cowboys on the range go for months at a time without contact of any kind with women. When the visits of the two girls from the city get the cowboys on the roundup excited, Creede has to persuade them to stop singing bawdy songs. But Coolidge ventures no further into the landscape of the libido. That not a single prostitute is even remotely alluded to in this novel says how sexuality is being candy-coated for popular consumption. Like Wister, the language is correspondingly suitable for polite reading. Both cowboy heroes, the Virginian and Creede, stop before completing the phrase, “son of a ___.”
Politics. While The Virginian was dedicated to Teddy Roosevelt, a college friend of Owen Wister, Coolidge's novel is set squarely in the political climate of the TR administration. Coolidge notes early on that over-grazing of public lands can be prevented by declaring them federally protected forest reserves. Cattle and sheep grazing would be permitted then by license only.
However, Coolidge explains, “there was a combination of railroad and lumber interests, big cattlemen, sheep men, and ‘land-grabbers’ that was ‘against any interference on the part of the Federal government,’ and ‘opposed to any change of existing laws and customs as to the grazing of live stock upon the public domain’” (p. 428). This group, together with other anti-administration interests, had been able to prevent the creation of these reserves.

You can see which side of the political spectrum Coolidge leans toward. Familiar with the libertarian, anti-government attitudes of the West, he’s an advocate of progressivism.
Style.  I'll end with a few quick words about Coolidge's style. Opinions may differ, but I found this old book more easily readable than others from the period, including The Virginian. While the pacing is more leisurely than current westerns, the expression is less dated, syntax smoother for a modern ear, and word choice less stilted. That may seem like faint praise. You be the judge. Here's a sample from a scene describing a fist fight:
Jasper Swope was a rough-and-tumble fighter of note; he was quick, too, in spite of his weight, and his blows were like the strokes of a sledge; but Hardy did not attempt to stand up against him. For the first few minutes it was more of a chase than a fight, and in that the sheepman was at his worst, cumbered by his wet clothes and the water in his shoes. Time and again he rushed in upon his crouching opponent, who always seemed in the act of delivering a blow and yet at the moment only sidestepped and danced away (pp. 460-461).
Assuming that you’ve read this far, you may feel you know more than you will ever care to know about Hidden Water and Dane Coolidge. Reading a 100-year-old western novel can make all kinds of interesting things jump out at you while reading a new one. And it’s fascinating (at least for me) how the genre has grown and evolved with the generations of readers who have read and enjoyed them.
Picture credits: Illustrations by Maynard Dixon, from the 1910 edition
Coming up: Garden of Evil (1954)
Posted by Ron Scheer at 11:01 AM