Here's the last word about Emerson Hough before I move on to his fiction. Wrapping up my own notes on his book, The Story of the Cowboy (1897), I thought there might be interest in a subject he covers in one chapter - the range wars of the frontier - and two in particular, the Lincoln County War (c1880) and the Johnson County War (1892). 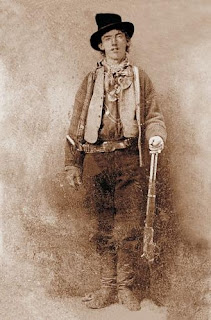 Lincoln County War. Having lived for a time in central New Mexico, Hough had heard plenty about the Lincoln County War. Little is really known for sure about that conflict, he admits. It took place in a time and place without modern news gathering as it existed in 1897. But he passes along what he’s heard and gives it his own spin. It was a time, he says, when the bravery of hardy and determined men confronted the savagery that lies at the heart of human nature
According to him, this “war” resulted in the deaths of 200-300 men. The villain at the center of it all was Billy the Kid, who gets painted by Hough as one mean desperado. Dead at the age of 23, he was credited with the killings of 23 men. He and his gang were said to have mercilessly shot seven Mexicans, “just to see them kick,” though it’s not clear whether Hough counts any of these among the 23.
This reign of terror developed into open warfare when Billy took on wealthy cattleman John Chisum, who defended himself and his property with a band of armed men of his own. Hostilities finally reached a flash point in the streets of Lincoln, where Billy eventually escaped from a burning house.
All of which is only somewhat accurate.
Hough makes no mention of the actual antagonists in the Lincoln County War. These were Lawrence Murphy and James Dolan on one side and John Tunstall and Alexander McSween on the other. We now know that Billy became directly involved in this conflict of interests when Tunstall, who had hired him, was murdered.
Hough provides his own version of events right up to Pat Garrett’s shooting of Billy. It is a scene told in detail that corresponds closely to the accounts of modern historians. It’s interesting that Billy’s final moments were known so well at the time, even while much of his story was the stuff of legend and hearsay.
There’s no mistaking where Hough’s sympathies lie. He portrays Billy as a scoundrel and a ruffian, who’d murdered his first man when he was only fourteen. Historical records show that he was actually sixteen at the time and he never killed more than nine men – maybe as few as four. He was also just 21 when he died.
Hough would surely have been appalled to know that Billy was to become a folk hero, still admired 130 years later. For him, the hero of the story is Pat Garrett, who as sheriff put an end to the young criminal. Pat Garrett, he reports, “is a respected ranchman, as pleasant a man as one would ask to meet” (p. 309).
Johnson County War. This range war had taken place more recently in Wyoming. Though only two lives were lost in the conflict between cattlemen and rustlers, it was covered extensively by the national press. Still, Hough chooses to put more confidence in the oral accounts given to him from individuals directly involved on both sides.
And both sides were in the wrong, he argues. The rustlers, with their own duly elected sheriff in Buffalo, were no better than a loosely organized form of organized crime. But the band of vigilantes with their death list of 125 names were more to be scorned, for their foolhardy and cowardly behavior.
For the most part wealthy men from the East, they knew nothing of the plains. The twenty cowpunchers from Texas they hired as mercenaries should have been in charge. Stupid mistakes would not have been made, and the vigilantes wouldn’t have ended up besieged in a ranch house and requiring rescue by the troops from a nearby Army post.
Worse yet, these men fled to the protection of the law, which they had so openly flouted. And with their money and influence were able to escape justice for the killing of the two “rustlers,” Nate Champion and Nick Ray. Hough even portrays these two men sympathetically. He reports the content of a letter found on Champion’s body, describing his last hours in the house where the vigilantes have held him under siege.
Hough points out that there were cowboys on both sides of this conflict, living by the code of the West. And only among those can be found men who acted honorably in this “unpleasant” matter – for such a man shows true courage: "Misguided and impulsive perhaps, he was always eager to be where the fighting was thickest, and there he conducted himself as a man according to the creed under which he had been reared” (p. 323).
Photo credit: Billy the Kid, wikimedia.org
Coming up: More cowboy memoirs and Emerson Hough's Heart's Delight (1905)
Posted by Ron Scheer at 5:52 AM