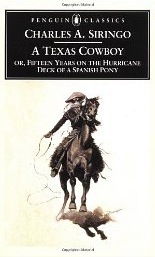 Charles Siringo (1855-1928) was all of 28 when he wrote this memoir (full title: A Texas Cowboy; or, Fifteen Years on the Hurricane Deck of a Spanish Pony). Born on the Gulf Coast of Texas, Siringo worked in one job after another across the Midwest and Southwest, ranging from St. Louis to New Mexico. Still a teenager, he settled on cowboying at the time of the great cattle drives and was apparently very good at it, though no luckier than most at making a living from it.

He worked for many years for the LX ranch in the Texas Panhandle, for a while rounding up cattle that had drifted away or were stolen. This occupation put him in New Mexico at the time of Billy the Kid, who was four years his junior. He never met Billy but knew men who did, and his imagination seems to have been fired by the stories they told about the pursuit and eventual shooting of this young outlaw.

Though by his own account Siringo never shot a man himself, he was a dead aim with a six-shooter. His memoir was written, as he admits in his preface, to make money "and lots of it." It's not great literature, beginning with his earliest childhood memories and recounting the events of his life with no particular sense of compelling storytelling. It's just one darn thing after another.

But a reader with some patience will be rewarded in the latter part of the book as his adventures begin adding up to something like a real narrative. Working for the LX as a range detective, he begins emerging as more of a coherent protagonist in his own story.

And it's not all about the work of cowboying, herding and rounding up cattle, and taking them to market. There are some close scrapes and some fearless derring-do. And there are also matters of the heart, as the young cowboy falls in love with a string of sweethearts he meets along the way, finally marrying one he meets in Kansas and ending his career as a cowboy.

As a range detective, Siringo shows up in other writings of the period and also as a fictional character in novels. A bit raggedy as narrative, his memoir is rewarding for what it reveals about the Wild West, cowboys, ranching in the days of the open ranges, and social history of the late 19th century. [The 1950 edition is worth having for the introduction by Texas folklorist J. Frank Dobie.]