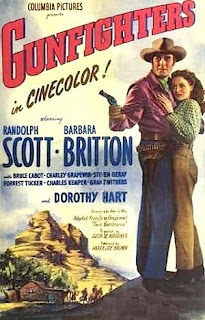 This is one of those westerns that might have been dreamed up by a 14-year-old. The plot is a far-fetched configuration of just about every convention of the genre. Based, as the credits tell us, on a novel by Zane Grey called Twin Sombreros (1940), it has that writer’s general disregard for history, reality, and geography.

That said, the film has the saving grace of a starring role for Randolph Scott, some excellent color cinematography, a few breathtaking stunts, and well-edited action scenes. If you ignore the worn conventions, the contrived plot, and the perfunctory romance, there’s enough to enjoy.

Plot. Scott is a gunfighter who is giving up his guns. Arriving at a ranch, where he hopes to take an honest job as a cowpuncher, he is moments too late to prevent the shooting death of an old friend. The two killers are already riding off in a cloud of dust.

Big-time rancher Mr. Banner (Griff Barnett) sees to it that Scott is arrested for the killing, and the posse nearly hangs him before he is rescued by another, friendlier rancher (Charley Grapewin). Taken to the sheriff in town, Scott clears himself and leaves again a free man.

Determined to find the killers, he returns to the Banner ranch, where it turns out there are two sisters (Barbara Britton, Dorothy Hart) who take an interest in him, though one of them is only pretending. She’s covering for her true love, the ranch foreman (Bruce Cabot), who is the villain of the story.

Back at Grapewin’s ranch, Scott meets an aspiring young gunfighter (John Miles). He gives the boy some tips on fast drawing while warning him away from gun fighting as a profession.

Cabot and a deputy sheriff (Grant Withers) keep taunting Scott to put on his guns. Meanwhile, Cabot hires a shady character (Forrest Tucker) to do some dirty work. Tucker ambushes Grapewin, Withers provokes Scott into a long fistfight in the street, and Miles is chased by a posse and shot dead.

Borrowing a pair of sidearms to settle an old score with the deputy, Scott finds Withers at the sheriff’s office and gets a confession from him at gunpoint. The deputy admits that Banner was behind the killing of Scott’s friend in the opening scenes.

When it becomes clear to Hart that her father has been guilty of a long series of misdeeds, she begs Scott to go easy on him. He’s had to be tough to build his empire, she says. But Scott begs to differ. The old man has to be stopped. She angrily tells him, “You’re just a killer, you’ll always be a killer.”

Well, yes and no. When he arrives at the ranch, first Tucker and then Cabot draw on him, and the two men bite the dust. Hart, fed up with it all, has packed her saddlebags. Seeing her father draw on Scott, she picks up a revolver and levels a mortal shot at the old man.

The villains’ days now over, Scott decides to give an honest life another go, gets rid of his guns again, and rides off across the desert. Hart jumps on a horse and chases after him. They ride off together as the music swells.

Death. Scott is his handsome self, congenial and smiling, happy to banter with the two women in the story. He’s good for a kiss or two. But you never buy him as a gunfighter. He’s too clean cut and untouched by the string of deaths he’s been responsible for.

Forrest Tucker’s bushwhacker comes a good deal closer to the kind of cold-blooded and remorseless personality you would expect of a killer. Sullen and irritable most of the time, he relishes the moments as he draws a bead on Grapewin. He waits to pull the trigger, almost letting the man get away. Then he smiles like a kid with a new pony as he squeezes off a shot and sees his victim struck down.

For that matter, death itself is hardly worth anybody’s fuss. As in a video game, it occasions no one’s grief. Bodies are never buried. At the demise of her sweetheart, one of the sisters (Britton) slumps and turns away from the camera, as if to say, “There go all my plans.”


Added value. While the plot and the performances are uninspired, the cinematography and editing lift this film above the ordinary. The opening sequence is a clever invention, as the camera looks through a saloon window to the back of a piano player. On the other side of the piano and facing the smoky room is a man standing, who turns and reveals himself to be Scott. He sets down a beer and walks out of the frame. Meanwhile the opening credits have begun.

A worried saloon girl appears, reaching over the piano to hand the piano player a pistol. A second man takes it back from him and storms away after Scott. Cut away to the street where Scott walks across to an open door, the second man follows, Scott comes back out, and as the second man draws on him, Scott turns and shoots him down.

The scene immediately following opens on a partly darkened room, with what looks like morning light in the windows. Scott and the doctor are seeing to the wounded man. The two shooters are, we learn, friends, and simple male ego has driven one to try his luck at gunplay with the other. It’s maybe the most heartfelt scene in the movie, as Scott speaks kindly to his friend, and says he’s hanging up his guns. You can watch it below:

It’s a great beginning, and unusual for a western, which often starts with a lone rider crossing a dramatic landscape. The rest of the movie never quite lives up to the more realistic style of storytelling we get in these opening scenes. Its strengths instead are the action sequences. Chases are well filmed against handsome western landscapes, and they are well cut and exciting.

The street fight between Scott and Withers is prolonged and full of nice flourishes. It begins with Withers ramming his horse into Scott’s and knocking Scott to the ground. As Scott struggles to gain his feet, Withers keeps trying to trample him under his horse’s hooves. Much of this is filmed from directly overhead, an unconventional perspective.

Dragging Withers from his horse, Scott shifts into an old-fashioned fistfight. As they wrestle each other to the ground, they end up under a team of horses pulling a wagon. When the horses bolt, Withers is dragged by the wagon until Scott frees him. Performed by stunt men, it is a breathtaking sequence that is also an imaginative treatment of the standard western fistfight.

Depending on your need for comic relief, the film also features a cantina owner, Jose (Steven Geray), who gives a broadly stereotyped portrayal of a Mexican. Romance, as already indicated, is a little thin, though Britton and Hart surely grace the film with their presence and actually do look and act like sisters. Color design in muted grays and browns is also worth a mention.

Wrapping up. The film was directed by George Waggner, who had an extensive career in film and TV, starting with several B-westerns in the 1930s. His TV work included 41 episodes of 77 Sunset Strip (1959-1963). Gunfighters was shot in Southern California in Vasquez Rocks Natural Area Park, the Andy Jauregui Ranch, and the Monogram Ranch.

The screenplay was written by Alan LeMay, who produced numerous novels and short fiction over much of four decades. He is remembered today for his novels The Searchers (1954) and The Unforgiven (1957), both made into classic films. Among 15 screenplays, he wrote the script for The Sundowners (1950), reviewed here a while ago.