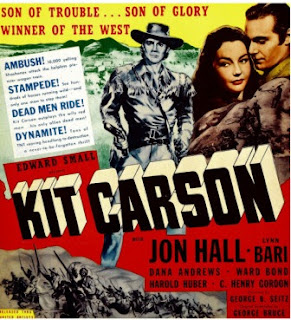 The short-lived Bear Flag Republic of California came into being in 1846 with a revolt against the Mexican military authority of Gen. José Castro. Instrumental in that uprising were two figures well known from American history, explorer John C. Frémont and his scout, Kit Carson. Working together through the 1840s, they had opened up the West to immigration along the Oregon Trail.

This western portrays both men as heroes of westward expansion. Before tackling the Mexican forces under Castro’s command, they successfully escort a wagon train of settlers across hostile Indian country. For romantic interest, the two are involved in a love triangle with the daughter of a wealthy Californian.

Plot. As the story begins, Frémont (Dana Andrews) is waiting with his troops and a wagon train bound for California at the fort of Jim Bridger (Raymond Hatton) on the Oregon Trail. Trapper Kit Carson (Jon Hall) and two companions (Ward Bond, Harold Huber) arrive, and Frémont tries to persuade Carson to take command of the train as wagon master.

Carson first declines, despite the appeals of a prominent member of the immigrant party, Dolores Murphy (Lynn Bari). They are fools, he says, to take women and children into Indian country. But apparently out of boredom, he changes his mind, and he and his two pals join the train.

The Shoshone waste no time giving them trouble and make a night attack in an effort to run off the horses. Two sentries on night duty are shot, and there is a fierce gun battle with numerous casualties. Meanwhile, we learn that the Indians’ rifles and being supplied by General Castro.

Capturing one of Castro’s lieutenants, Carson, Frémont, and Bond interrogate the man by tying him up and pitching knives and hatchets at him. And from him they learn what Castro has been up to. Seeing no need for a fair trial, Frémont calls up a firing squad and the lieutenant is soon disposed of. Barri is horrified at their cold-hearted savagery.

Determined to find a direct route through the Sierras, Frémont and his men part company with Carson and his wagon train. Carson argues that taking the long way around has numerous advantages, but Frémont cannot be dissuaded. And he marches off directly into an Indian ambush. The wagon train is soon under attack, too. Only after some heroics by Carson are the troops rescued and the Indians driven back.

Cut to the hacienda of Bari’s father in Monterey. There’s a fiesta in progress with dancing and drinking, but Carson is not much of a partier. Time to go check traps along the Platte, he says, and departs with Bond and Huber.

Discovering a camp of Mexican soldiers, they capture one of Castro’s officers, a congenial and rotund General Vallejo (Lew Merrill) who is an amigo of the americanos. He’s relieved to be taken captive, as it means sanctuary from Castro, who has grown suspicious of him.

Vallejo happily spills what he knows about Castro’s plans to run the americanos out of California and then declare himself emperor of not only California but all of Mexico. Someone brings out a bear flag, and the revolt is in full swing.  Attacking the hacienda where he believes the americanos have all gathered, Castro is held off by Carson, his pals, and a handful of others. Frémont’s troops then drive the Mexicans off, and the republic is born.

Romance. Romance intrudes on this story of a historic adventure when Bari notices that when the woman-shy Carson takes off his boots, he’s wearing no socks. She tries to win his gratitude, if not his interest, by knitting a pair for him. Meanwhile, out on the trail, Frémont has set his eye on her and is making his own moves. While Carson is away on a scout, Frémont proposes marriage. But he learns that she prefers Carson.

At the fiesta at her wealthy father’s hacienda, Bari tries to get Carson to dance. No such luck. Marriage doesn’t fit into his free-as-a-bird lifestye. After he leaves, Frémont proposes to her a second time, and she tells him, “The man I love has just ridden away.”

A gentleman from beginning to end, Frémont remains sanguine about his standing with her. In the final scene he yields to Carson, who can’t keep saying no to the persistent Bari. He gives her a big kiss and then rides off with Frémont for further engagements with the Mexicans as war has broken out between the two countries.

Just the facts. What would a more factual film about these two adventurers look like? Somewhat darker for sure. There were a couple of rather telling incidents for both Carson (1809-1868) and Frémont (1813-1890) that might well be included in a film made today.

One represents a less one-sided portrayal of their relations with Indians. After Indians infiltrated Frémont’s camp one night in 1845, and three men were killed, he and Carson made a reprisal raid on an Indian settlement, which they totally leveled. Warriors, women, and children were reported killed. Historians believe that a totally different tribe was to blame for the deaths of Frémont’s men.

The other incident shows the two men in the deliberate murder of noncombatants. In 1846, as hostilities escalated between the Mexican army and the americanos, Frémont jailed the alcalde (mayor) of Sonoma. When the man’s elderly father attempted to visit his son, Carson took him prisoner. Frémont is reported to have said, “I want no prisoners.”And at Frémont’s orders, the man and two 19-year-old brothers taken with him, were executed by Carson.

The film has its share of Indian and Mexican killing, but the deaths are justified in that way Hollywood smooths over unpleasant facts. There are no “good” Indians in the film, and the one Mexican put to death by Frémont’s firing squad has been actively menacing them, supplying the Indians with firearms.

As for romance, while Carson and Frémont may have had their dalliances while away from home, history books tell us that both were men recently married. Frémont had taken to wife Missouri Senator Thomas Hart Benton’s 16-year-old daughter, Jessie—actually eloping with her, and there’s your true romance. Carson was recently married to his third wife, 14-year-old Josefa Jaramillo, daughter of a prominent family in Taos, New Mexico.

Wrapping up. Every film is a reflection of the time when it was made. For American audiences in 1940, its heroes were clean shaven or tidily mustached men, as we get them here. And a villain would not surprisingly bear some resemblance to Hitler. General Castro’s genocidal policies against americanos and his megalomaniacal plans to be emperor of all of Mexico suggest the ravings of that particular madman.

Though the story is set on the Oregon Trail, parts of the film take place in what is recognizably Monument Valley in Utah. Shot in gorgeous black and white, the film packs a lot of action that is often visually striking. There are iconic images here of Indians with war bonnets, long shots of tiny wagon trains creeping across arid landscapes, and firefight casualties falling from horses, cliffs, and other elevations.

One odd quirk is Ward Bond’s use of a boomerang as a weapon. His character has apparently been to Australia and picked up some tricks there. Huber, the third man in the trio of trail pals, plays a tiny concertina. Both men are comic foils to the steady, self-effacing manner of Jon Hall’s Kit Carson and the pleasant gallantry of Dana Andrews’ Frémont.

The film was directed by George B. Seitz, whose directing career began in 1914. Among more than 100 films, he was responsible for much of the Andy Hardy series. In 1940, Dana Andrews was just beginning a long screen career with more than 100 acting credits, almost none of them westerns.

Jon Hall and Lynn Bari were stars of numerous B movies through the 1930s to the 1950s. Hall starred in the TV series Ramar of the Jungle (1952-1954). Screenwriter George Bruce would go on to write Walk a Crooked Mile (1948) and Kansas City Confidential (1952). Clayton Moore (unrecognizable without his mask) appears in a small role as a member of the wagon train party. The film was shot in Arizona, Utah, and at the Iverson Ranch in Southern California.

Kit Carson is currently available online at youtube and at amazon and Barnes&Noble. For more of Tuesday’s Overlooked Movies and TV, head on over to Todd Mason’s blog.
Tweet