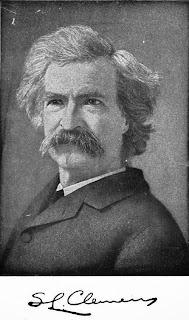 Writing in 1913, H. L. Mencken called Mark Twain (1835–1910) “the true father of our national literature.” In 1934, Ernest Hemingway ranked the author with Henry James and Stephen Crane and opined, “all of American literature comes from one book by Mark Twain called Huckleberry Finn.”

More interesting from the viewpoint of frontier fiction, F. Scott Fitzgerald ventured in 1935 to call Huckleberry Finn “the first journey back.” He says of Twain, “He was the first to look back at the republic from the perspective of the west.” And it’s worth remembering that Twain himself had traveled in the West by the time he wrote this novel of life on the Mississippi, set during the years of his own boyhood before the Civil War.

One of many ways to read the novel is to see it as a prequel to a tide of frontier fiction that followed. Huck’s is the backstory of the typical hero of the cowboy western. Think of how many of them have a central character who started out like him, either an orphan or a runaway, who has come west—"lighting out for the Territory," to use his words for it.

Consider the basic elements of the mythic cowboy:  his preference for drifting and living outdoors, carrying a rifle and shooting game for food, getting in and out of scrapes while relying on his wits and knowledge of survival skills. These elements of the myth, along with visits of loneliness and attachment to a "pardner," are already there in Huck.

Huck’s basic decency is another parallel. Unschooled and unadulterated by pious religious beliefs, he does the right thing, even when he suspects that it is wrong. He is haunted with guilt that he has broken the law by helping the slave Jim run away from his owner, Miss Watson. While reason may not lead him to question slavery itself, he gradually comes to acknowledge Jim’s worth as a human being—and as a friend.

Plot. For anyone who hasn’t read any or all of the novel, you no doubt know the novel’s basic plot. Huck Finn and Jim take a ride on a raft down the Mississippi River. Along the way, they have several adventures (for a full plot synopsis click over to wikipedia).

After separations and reunions, Huck eventually winds up on a plantation far down river, where Jim has been captured as a runaway slave and is being held captive. There they are joined by Tom Sawyer, who happens to be visiting relatives on the very same plantation.

Themes. You could write a book about all that’s going on in this novel, and it would be only a small part of the growing discourse among other readers who have also found much to say about it. What struck me was how so much of the story is about subterfuge. Huck is forever making up stories about himself, pretending to be someone else to escape detection. Early on, he fakes his own murder. Soon after, he’s disguising himself in a girl’s dress.

Then he and Jim are joined by a couple of hucksters who give themselves phony identities as nobility and run elaborate cons on the residents of river towns they pass through. Huck gets sucked into these schemes and ends up telling more lies—once to save three young women from being victims of a hoax.

The nuttiest turn comes at the end as Tom Sawyer hatches an elaborate plan to free Jim. His head full of far-fetched adventures found in storybooks, Tom isn’t satisfied with simply sawing away a chunk of log to let Jim crawl out of the shed where he’s being held. Days pass as Tom plays out rescue fantasies, and not only does the eventual escape fail, but Tom gets shot in the leg. Hemingway didn’t like this ending and told readers to stop before wading into the last chapters. Twain scholar Charles Neider makes a similar argument and cut these chapters by almost two-thirds (over 9,000 words) for his 1985 edition of the novel. Tom Sawyer may have been Twain’s sentimental favorite, as Neider assumes, but I’m not so sure. Tom’s love of romantic adventure is both foolhardy and perilous. It nearly gets him killed.

Though Huck is making up stories and hiding behind false identities from beginning to end, it’s always to protect himself and Jim. His life is an adventure. He doesn’t have to manufacture one. Tom is still a boy at the end, living in a boy’s fantasy world. Self-reliant Huck has grown into adulthood. His adventures have forced him to confront some of life’s paradoxes and imponderable truths.

As one example, there’s what he learns of fairness, justice, and morality. Conscience, he discovers, is not a helpful guide. After he arrives too late to keep his con artist friends from being tarred and feathered, he thinks:

I warn’t feeling so brash as I was before, but kind of ornery, and humble, and to blame, somehow—though  I hadn’t done nothing. But that’s always the way; it don’t make no difference whether you do right or wrong, a person’s conscience ain’t got no sense.

At the end, Huck is still a boy in years, and depending on what happens to him afterwards, there’s no telling what sort of man he will become. But he’s good-hearted and resourceful, with good instincts, and you can see versions of him showing up before long in the outpouring of frontier fiction that came in the decades that followed.

Jim. I suppose you can’t talk about this novel today without at least mentioning the use of the n-word. Read other popular fiction from Twain’s time, and you'll find the casual use of racial epithets to be common. (See my discussion of this topic a while ago.) The difference in Twain is that (a) it’s hard to find another example like Jim of a fully formed black character in the work of Twain's contemporaries, (b) Twain portrays him with notable dignity for a man living under conditions of slavery, and (c) Huck’s use of the word “nigger” is surely an accurate representation of its general use at the time.

Yes, Jim is still a stereotype. But malice seems not to have been intended, and most of the other characters seem no less stereotyped. After all, the book is a comedy and not a melodrama or a tragedy. As for use of “nigger,” Twain could not have known the word would evolve almost exclusively into a racial slur a century later.

I’d also argue that you can’t immerse yourself in history without acknowledging the racial attitudes of the time. Selectively euphemizing or expurgating the past is both whitewash and denial. I’m OK with the novel as Twain wrote it, and I’d encourage readers to swallow any objections and read it for the humanist view on race that he advocates. 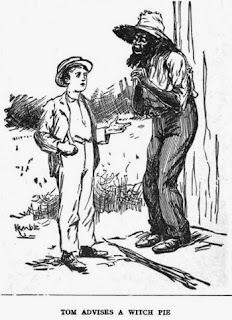 Wrapping up. Reading Huckleberry Finn, I have discovered that I’d probably never read the entire novel before from beginning to end. I knew Hal Holbrook’s one-man show, buying an LP recording while in Hannibal, Missouri, in 1960. Later, I got to see him do the show live at the Clemens Center in Elmira, New York. Besides that, I must have read only excerpts. The full novel is a wonderful, casual, almost lazy read and a forerunner of American picaresque novels and road movies.

Though episodic, there is the connecting thread of the journey down river and the growing suspense as Jim risks capture as a runaway slave. The tenderness that develops between Huck and Jim is also a surprise. You find yourself recalling Leslie Fiedler’s 1948 essay on male bonding in American fiction, “Come Back to the Raft Ag’in, Huck, Honey.”

The Adventures of Huckleberry Finn is currently available online at google books and in text, audio, and video formats at Internet Archive. It can also be found at amazon, Barnes&Noble, Powell’s Books, and AbeBooks. For more of Friday’s Forgotten Books, click on over to Patti Abbot’s blog.
Tweet