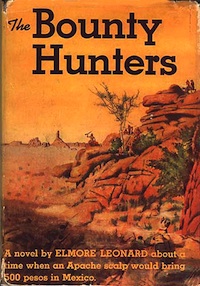 This was Elmore Leonard’s first published novel, written in his late twenties. In it, already fully developed, is the trademark edge that he brings to his fiction. With its opening scene in a barbershop in Contention, Arizona, we get just that—an exchange of contentious dialogue that’s both bristling and funny. It’s the same mastery of verbal dispute between people at sharp odds with each other that makes “Justified” so much fun today.

Plot. Leonard’s central character is an Army scout, Dave Flynn, who escorts a fresh young lieutenant south of the border to bring back a renegade Apache chief. Flynn is a Civil War veteran who resigned his commission, disillusioned after witnessing a commanding officer’s act of cowardice. For the lieutenant, Bowers, the story tells of a fledgling officer learning how to use his wits and his own natural cunning instead of going by the book.

In Mexico, a bounty is being paid for Apache scalps. What the two men find is a gang of norteamericanos who are killing Mexicans and presenting their scalps for payment by chief of rurales, Lamas Duro. The rurales are a police force made up chiefly of untrained law enforcers and former bandits. Duro is a contemptible, terrified man, subduing his fears with steady drinking. The gang leader, Curt Lazair, is a soulless murderer of innocents, who has taken a young woman captive and is keeping her at the gang’s hideout. 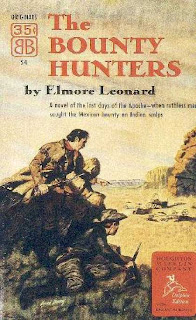 Flynn rescues the girl. Meanwhile, Bowers discovers that Duro’s second in command, a veteran of the revolt against the French, is shamed by how he is being used as an instrument of injustice and incompetence. The novel’s climax involves both an Apache attack and armed retaliation by the men of the village against Duro. Motivation for all that happens in the closing chapters produces awkward and not so plausible complications.

Character. Flynn makes an enjoyable hero, much as Raylan Givens in “Justified.” He is sharply intelligent and steady, an individual too independent to take orders from men he can’t respect. He is his own authority, with a knowledge of the world and others learned the hard way. Yet he doesn’t venture all that far from social connections. Unwilling to give himself to a career in the Army, he still accepts a job as a scout for that same organization.

Flynn has seen it all. He’s witnessed the dishonorable behavior of men, shirking duty with impunity. Though disillusioned he could be utterly cynical, but he’s not. There is a man or two he still admires. Chief of scouts, Joe Madora, is one of them. He is astute, trustworthy, and a reliable friend. He also has a sense of humor. The Indian chief, Soldado Viejo, also wins Flynn’s respect. When the two meet, the scene evolves into a long match of wits that ends at best in a draw.

While Flynn has his own code of honor, he faults himself for being a quitter. At one time, he might have held others to a higher standard of conduct, but he walked away instead. Thus he makes a curious choice at the end of the novel that allows Bowers to retain a measure of his youthful idealism. 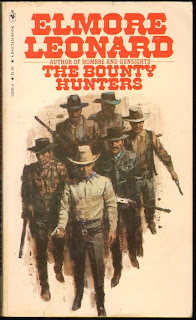 The villains of the novel are real sleaze bags, as they are in “Justified.” Duro is cowardly and despicable. Lazair is a psychopath, who “believed in little and trusted even less.” An interesting invention is Frank Rellis, who challenges Flynn in chapter 1 over occupation of a barber chair. Thinking he can interrupt Flynn’s haircut at the point of a gun, he gets kicked into the street after a sharp exchange of words.

Later on, in Sonora, Rellis appears again and makes more trouble, this time with Bowers in a taverna. The stakes are higher this time and after more high-tension dialogue, the results are fatal for him. Rellis is such a nasty, pathetic foil for the likes of Bowers and Flynn, you can actually miss him when he’s gone.

Style. The novel is enjoyable as an early attempt at long-form fiction by a writer who became a master of it. Besides the dialogue, the action is often—though not always—crisply described. Leonard has said that he writes stories that come out of the characters, and while the characters in this novel are fully realized, the plot tends to meander at times. The characters, in fact, are most alive when they are talking. In action, they sometimes lose focus as they are being shuffled about by the plot.

The story is told from a half dozen points of view. Scenes occasionally shift into stream of conscious as a character ponders a situation. Here Bowers puzzles over Flynn:

Flynn can almost convince you that he’s right even before he says one word. It’s his manner. The way he goes about things. He doesn’t get excited. He seems absolutely perfectly honest with himself; that’s why you believe what he says. 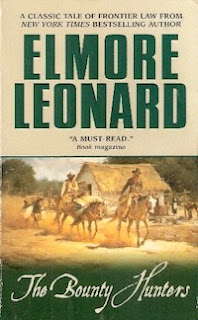 Leonard’s descriptive style is spare and economical. However, he does not yet observe his well-known injunction against adverbs. In this novel, readers are likely to find them, as in this example: “Bowers said something in a low voice and he looked at Hilario embarrassedly. Flynn looked at Bowers curiously.” You’ll even find an occasional “suddenly.”

Leonard treats the death of characters with more affect than is typically found in westerns. When survivors learn of the deaths of family and loved ones, he makes an honest effort to describe the onset of grief. Later, after killing one of the Apaches, Flynn regards the body of the man with sorrow.

Wrapping up. This is definitely one for Elmore Leonard fans. Readers can find early evidence of the man’s storytelling skill, particularly in characterization. Instructive for writers is the way characters reveal themselves through dialogue, especially when it is a battle of wits, which is usually the case. As in “Justified,” outlaws may be criminal, but the worst crime is to be ignorant.

The Bounty Hunters is currently available at amazon, Barnes&Noble, and AbeBooks and for kindle and the nook. For more of Friday’s Forgotten Books, click on over to Patti Abbott’s blog.
Tweet

Source: Tuska and Piekarski, Encyclopedia of Frontier and Western Fiction, 1983